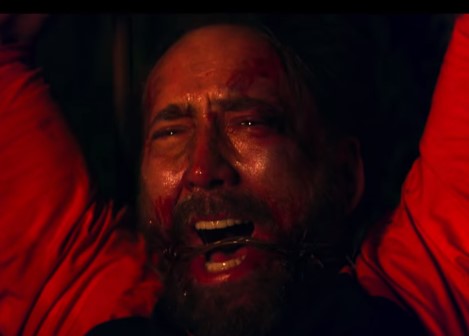 It is safe to say that Nicolas Cage is one of the most polarizing actors in Hollywood. While some think his work is over the top and gaudy, others believe he is one of the best artists in Tinsel Town today – if not, of all time.

With that said, fans of Cage have every right to rejoice. The actor recently starred in Mandy, a grindhouse action horror film and much to everyone surprise – it is a relative hit.

To promote the film, Nicolas Cage recently sat down with The Guardian and revealed several details about the movie and his very colorful life.

In the interview, Cage explained to The Guardian’s Hadley Freeman the reason why he took interest in playing the lead in Mandy. After all, Mandy is produced by Elijah Wood’s SpectreVision, a small production company. According to the actor, he has always been open to working in independent films. Smaller films give him the avenue to play around and experiment:

“Absolutely. I like to break forms, try different things, and I don’t think studios are comfortable with that. But in an independently spirited film, I can do that. Also, if I don’t have somewhere to go in the morning and a job to do, it can be very self-destructive. Then I’m just going to sit and order two bottles of red wine and dissolve, and I don’t want to be that person, so I have to work,”

If there is anything Cage knows for sure, it is the fact that he loves being an actor. He revealed that he is very proud of the work ethic he has developed. And he owes it to raising his two sons:

“I certainly have a work ethic, that I will say. I’m the first to arrive and the last to leave. But also I think my children are to thank for that. When you’re a father, you can’t behave like that.”

Mandy was released at the tailend of September. As of date, the thriller is doing especially with the critics. It currently holds an impressive 93% on Rotten Tomatoes. Critics agree that the grittiness of the movie is in part because of Cage’s gripping performance.

The success of the movie with critics is a shock not only to audiences but with the people behind Mandy as well. Elijah Wood was pleasantly surprised with the accolades and praises the movie has been getting. According to the actor, Mandy is the most successful movie their production company has released to date:

“This is absolutely the most successful film and best-reviewed film we’ve made since we started this company eight years ago to focus on genre and horror films and to push the boundaries of what one considers those things to be.”

He is moreso surprised especially considering the limited opportunities for marketing the film has had:

“That’s the thing that has surprised us so much. This entire movement — with screenings selling out and theaters adding new dates to accommodate the groundswell of interest — that is purely on word-of-mouth and reviews. It’s an extraordinary grassroots kind of thing.”