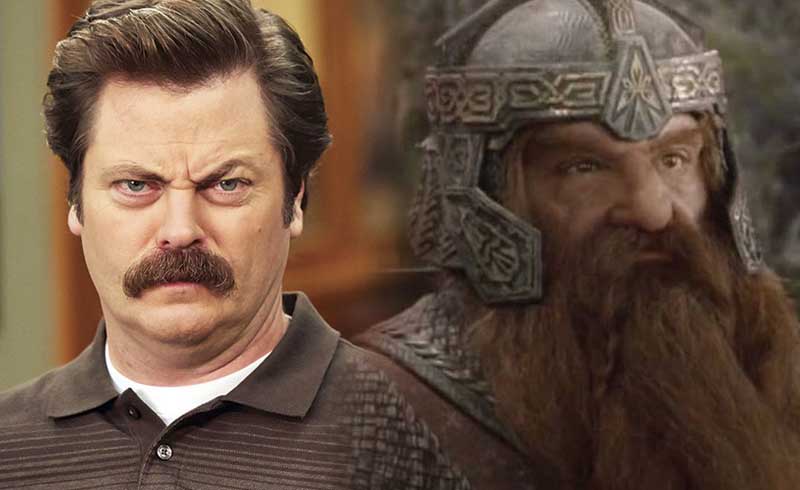 Parks and Recreation’s Nick Offerman is known for being a character actor, and he’s had some interesting roles in his career putting him in movies like Sin City and Bad Times at the El Royale. During one of his promotion videos for Good Omens, he reveals that he actually worked hard to get an audition for Peter Jackson’s Lord of the Rings, and they tried him out for Gimli.

Talking to Buzzfeed, Offerman talked about writing to Peter Jackson to get him an audition for the role of Samwise Gamgee, but instead he was asked to try out for the Son of Gloin. Offerman explains:

“When I heard they were making Lord of the Rings, I wrote dogged letters for a couple of years to [director] Peter Jackson, asking him to audition me to play Samwise Gamgee, After about 18 months, I was awarded an audition for the role of Gimli, the dwarf… and they got some jerk British guy, first-timer…”

Offerman was obviously joking in that last bit, since the guy who eventually landed the role, John Rhys Davies, is a prolific character actor as well and has been acting in TV and film since the 70s. Besides LOTR, fans may also remember Davies for his role as Sallah in Indiana Jones: Raiders of the Lost Ark. He even appeared in the LOTR movies twice since he also provided the voice of the Ent, Treebeard.

For now, Offerman may still have a chance to be in Lord of the Rings. Amazon is working on an LOTR series, and since Offerman already worked with them for Good Omens, maybe that gets his foot on the door when it comes to playing a hobbit. I mean, if Stephen Colbert could make it to the Hobbit trilogy, why not bring in Ron Swanson?