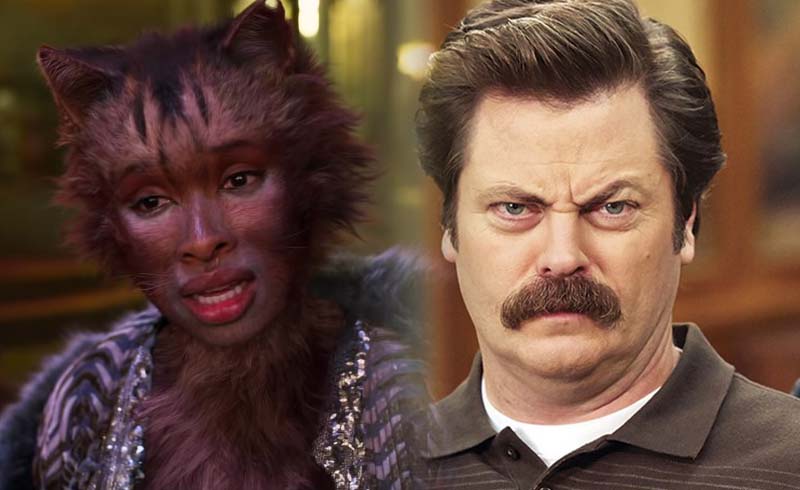 The trailer for Cats was released last weekend, and the film had admittedly been getting a mixed reception online. The internet is already poking fun at the movie, and Disney artist Joaquin Baldwin joker about a version of the movie where Nick Offerman (Parks and Recreation) is playing every character. What’s funny is, he got Offerman’s attention, and he’s all up for it.

Just to be clear, I’m sure that Offerman is just making a joke, but with the attention that this tweet has gotten, I’m sure there’s no way that it can just be ignored. It’s only a matter of time before we have Offerman dressed like a cat for a bit on Conan or James Corden. Let’s also not forget that Conan had a complete segment which just talked about cats that looked like Ron Swanson.

I think it’s also worth mentioning that someone had already deepfaked Offerman’s face into the characters for the Cats trailer. It’s not the full trailer yet, but with enough waiting, I think someone with enough free time on their hands can give us a full Cats movie with Offerman playing every character.

For now there’s not a lot of love going for Cats, but I’m sure the studio is already working hard to try and polish the film up before release. Let’s just hope this doesn’t end up like Sonic the Hedgehog and get delayed for months.

Here’s the synopsis for Cats:

A tribe of cats must decide yearly which one will ascend to the Heaviside Layer and come back to a new life.

Cats is set to hit theaters this Christmas on Dec. 20.