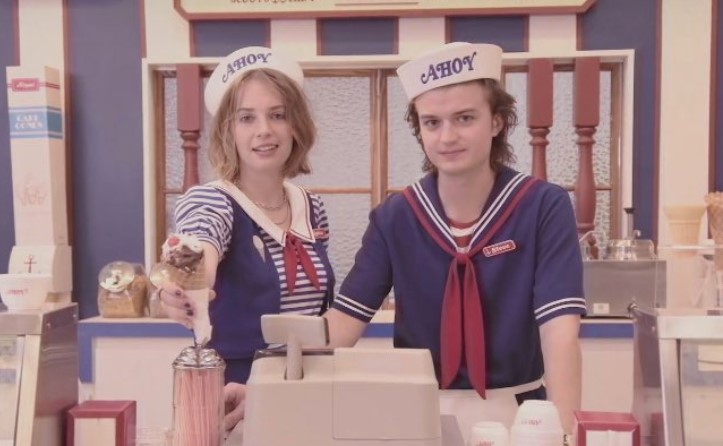 Though it hasn’t been confirmed, everyone is hoping that Stranger Things 3 releases this coming Halloween. The show is currently undergoing production, and a new video gives us a tease of Steve Harrington’s storyline and introduces new character Robin played by Maya Hawke.

The ice cream shop that the two are working at is called Scoops Ahoy, and it’s possible that Steve will find a new love interest in Robin. After all, Nancy made it clear that she’s very much more interested in Jonathan last season.

What’s interesting is, the Stranger Things’ writers room tweeted this video with the caption including the lyrics to Let’s Go to the Mall from How I Met Your Mother. In that show, there’s a character named Robin who was an ex-pop star in Canada, and her hit song was Let’s Go to the Mall. I wonder if the Robin here is actually inspired by the Robin in HIMYM?

Steve has had a very interesting character arc since the first season of the show. Though he was an antagonist in the beginning, he has now grown to be one of the core team, and everyone can’t wait to see more of him in the next season.

No release date has been announced for Stranger Things 3, but everyone is crossing their fingers that it comes out this Halloween on Netflix.