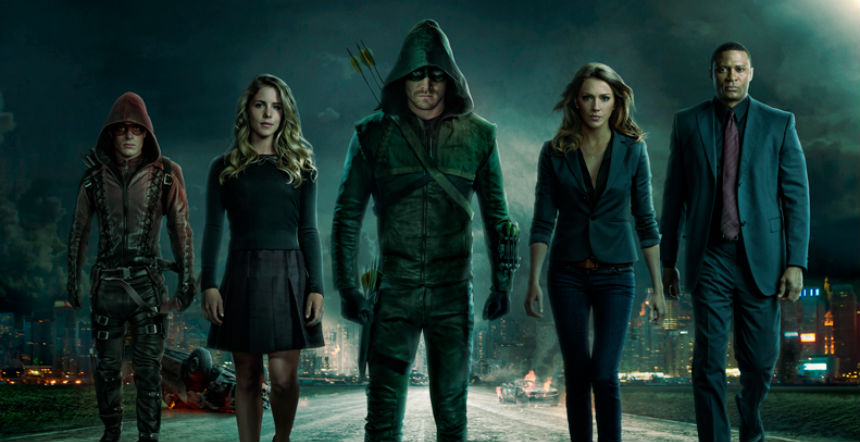 Arrow’s much-anticipated fifth season will see a very different line-up of heroes in the Arrowcave. As well as being Mayor of Star City, Oliver Queen will have his work cut out trying to train up a bunch of newbie vigilantes who have come to him for help. Thanks to some new images snapped by fans during filming in Vancouver, we now have our first glimpses of the brand spanking new Team Arrow in costume. Have a look below:

The photos show Stephen Amell alongside Rick Gonzales, Echo Kellum and Madison McLaughlin on a night shoot. Two of those will be familiar to Arrow fans already for playing Curtis Holt and Evelyn Sharp in season 4. This year the pair will get to suit up in the guises of Mister Terrific and Artemis, respectively. Gonzales is a newcomer to the show, however. He is playing Renee Ramirez AKA Wild Dog.

Here’s an image of the characters in the comics (or the Young Justice cartoon in Artemis’ case) to compare with the live-action versions.

On the whole, it is a pretty smooth transition for all three. Artemis still has her green colour scheme. Mister Terrific has the T-shaped mask and ‘Fair Play’ written on his sleeves. Wild Dog is probably the most faithful, though, with Gonzales wearing a perfect replica of the hockey outfit worn by the comics original. A round of applause for Arrow‘s costume designers, everyone.

Other vigilantes confirmed to appear this year (some good, some bad) are Ragman, Prometheus and, er, Vigilante. A mega four-way crossover with The Flash, Supergirl and Legends of Tomorrow is also to be expected. Arrow season 5 will kick off on Wednesday 5th October on The CW.