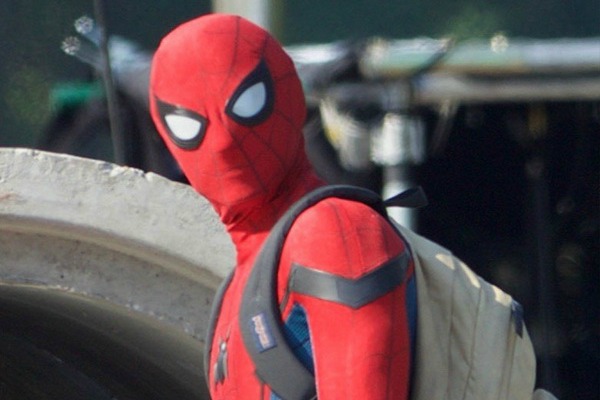 Typically we are used to seeing our Friendly Neighbourhood Spider-Man swinging through the New York City skyline at tremendous speeds, in pursuit of runaway thieves or costumed creatures. New photos from the set of the eagerly anticipated solo movie, Spider-Man: Homecoming, showcase a new form of travel adopted by the web-head, however.

These images of Tom Holland as Spider-Man show him jumping on a bicycle, as he filmed a supposed action sequence in Atlanta on Monday. The new set photos come via The Daily Mail and can be seen below:

So what happened Spidey, did your web-shooters run out or something?

These aren’t the first set photos to come out of the filming of Spider-Man: Homecoming. The first to emerge were of Tom out of costume on set with other actors marking the first week of filming. The next batch gave us our first look at Holland in full costume as Spider-Man. The 20-year-old actor even took to his Instagram account to share a selfie and mark one year until the film releases in cinemas.

The scene showcased in these new images supposedly begins with Spidey swinging down to street level, as he then looks at something above him before hopping on a bike and hauling out of there. One would assume the airborne entity Spidey is fleeing from is the rumoured villain of the film, The Vulture, played by Michael Keaton. No information has been shared by Marvel or Sony regarding the film’s plot. All we have to go on are these leaked photos.

Spider-Man: Homecoming is set to release on 7 July 2017 and stars Tom Holland, Michael Keaton, Marisa Tomei, Zendaya, Robert Downey Jr., Donald Glover, Logan Marshall-Green and Tony Revolori. Also joining the cast is The Nice Guys shining star Angourie Rice, revealed recently to have landed an unknown role. Gwen Stacy, maybe? The film is being directed by Jon Watts and takes Spider-Man back to his high school roots after his debut in the MCU in Captain America: Civil War.