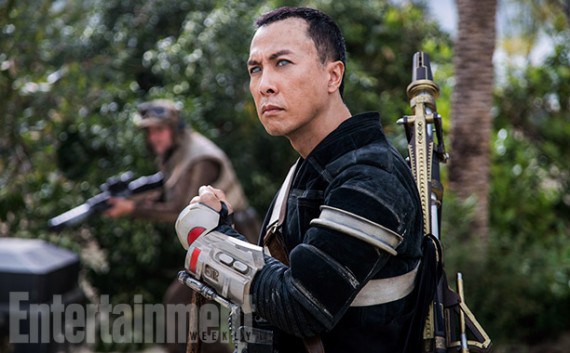 As December draws ever closer and the world prepares to descend into Star Wars fever once more, new information regarding Rogue One: A Star Wars Story is surfacing. Last week we received confirmation that Darth Vader will appear in the film, once again voiced by the legendary James Earl Jones.

Today, courtesy of Entertainment Weekly, relayed by HeyUGuys, we have ourselves some new images of Rogue One: A Star Wars Story to clamour over.

The headliner of these new images is the one showcasing the mysterious and badass-looking Shadow Trooper. With a fire raging behind the trooper, it appears these will be a force to be reckoned with for our team of heroes. Speaking of heroes, we also get another look at Donnie Yen and Jiang Wen’s characters, the latter seen crouched beside a downed X-Wing. Another shows our band of heroes storming a beach. When you piece together other images and footage we’ve seen, this appears to be a rather large action set-piece.

Although these images do not reveal new information surrounding the plot nor introduce us to new characters, they do reassure us of the film’s direction. Director Gareth Edwards looks to be going for a very gritty tone, very much embodying that of a war-themed flick. With this year’s Star Wars Celebration on the horizon, there is no doubt we will get new information and hopefully a new trailer.

Rogue One: A Star Wars Story opens in theaters later this year on December 16.