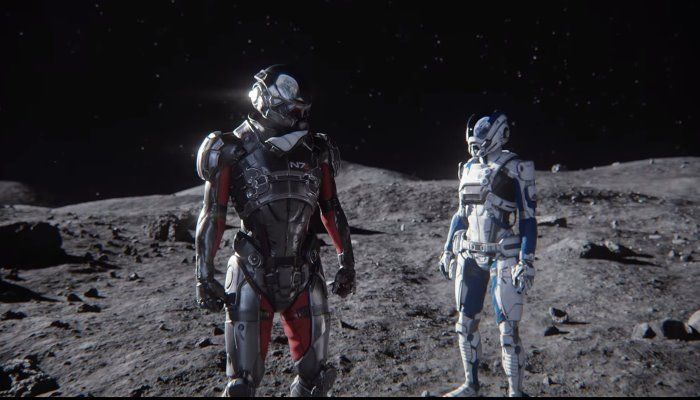 N7 Day is coming fast, November 7, and fans of the series are eagerly awaiting new information. To tease the impending day of details, BioWare has gifted us the following trailer.

The voiceover from the trailer, which some fans are speculating is Clancy Brown, teases “a future that begins 600 years from where we stand.” Does this mean Andromeda takes place 600 years after the conclusion of the original trilogy? It’s possible. However, “where we stand” isn’t made clear here. We’re also left pondering why the N7 character and his companion are on Earth’s moon. Is this prior to man’s departure from the Milky Way galaxy? Perhaps it’s a brief stop that was taken before heading to Andromeda. It could also mean nothing in relation to the game’s narrative. This is a teaser after all.

That said, the N7 appears to be the same character we’ve seen in other Andromeda trailers. His most notable appearance was in the game’s first teaser at EA’s 2015 E3 press conference. If so, then this teaser seems to indicate that the voiceover belongs to him. Continuing on, if the keen ears of fans are correct, this could mean that Clancy Brown is playing an integral part. How awesome would that be?

Whatever this means, it’s best we try to tame our enthusiasm. N7 Day is close at hand; so it’s only a matter of time before concrete details are revealed. It’ll be interesting to see how close fan theories have gotten to the truth. Is the N7-armored man Andromeda’s villain? We know he’s father to the two protagonists, the Ryder siblings. Some Mass Effect fans are theorizing he’s not on the best terms with his children, which will result in quite an interesting dynamic if true. Furthermore, such a family dynamic could mean our heroes won’t be forced to save the galaxy from another Reaper invasion, as Commander Shephard was tasked to do. Pulling the narrative away from a dire tale of that nature could bode well for the series. Besides, it’s the more intimate stories and character moments that Mass Effect nails best.

We’ll know more for sure on November 7. Until then, share your thoughts and theories in the comments below.