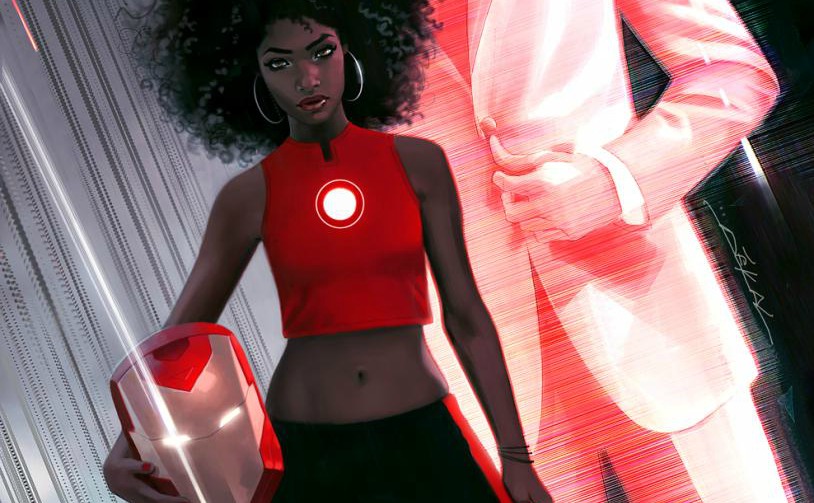 Time has revealed that the fallout of Civil War II will see Stark bowing out of the Iron Man gig, leaving another to take on the mantle. That new Shellhead will be 15-year-old student Riri Williams. A creation of Brian Michael Bendis and Mike Deodato, Williams was already introduced in the current Invincible Iron Man series. A brilliant scholarship student at M.I.T. (Massachusetts Institute of Technology), she has already made her own version of the Iron Man armour in her dorm room. A perfect candidate to take over, then.

Williams follows in the footsteps of other legacy characters who have been praised for helping to diversify Marvel comics — including half-Hispanic, half-black Spider-Man Miles Morales, Muslin Ms Marvel Kamala Khan and female Thor Jane Foster. The character is surely in safe hands as Bendis is already responsible for creating other fan favourites like Miles and Jessica Jones.

Here’s what Bendis had to say on where his inspiration for Riri came from:

“One of the things that stuck with me when I was working in Chicago a couple of years ago on a TV show that didn’t end up airing was the amount of chaos and violence. And this story of this brilliant, young woman whose life was marred by tragedy that could have easily ended her life—just random street violence—and went off to college was very inspiring to me. I thought that was the most modern version of a superhero or superheroine story I had ever heard. And I sat with it for awhile until I had the right character and the right place.

“As we’ve been slowly and hopefully very organically adding all these new characters to the Marvel Universe, it just seemed that sort of violence inspiring a young hero to rise up and act, and using her science acumen, her natural born abilities that are still raw but so ahead of where even Tony Stark was at that age, was very exciting to me.”

The writer is also keen to emphasize that, just because we now know that Tony Stark will retire from being Iron Man, it does not mean we know how Civil War II will end. Also, if you’re wondering, Riri probably won’t end up calling herself Iron Man.