Skip to content
Home » New ‘Zelda: Breath of the Wild’ Trailer and Breakdown 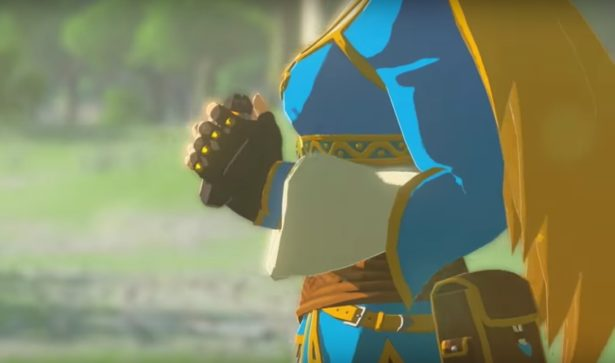 During the 2016 Game Awards we finally got another brand new look at the highly anticipated Zelda game Breath of the Wild. In the trailer, we get a short, but telling reimagining of Hyrule. A Hyrule that is very much in a state of ruin and decay. This trailer clearly takes place outside of the Great Plateau, the region shown off at E3 2016. The trailer offers a better look at what we can expect when the game releases sometime next year. Let’s break it down!

The trailer begins with a symbol most Zelda fans will recognize immediately, the symbol of the Shekiah tribe — The Skekiah Eye. This symbol has been in all the trailers that have come out so far, and it’s clearly important to the story. From the eye comes a single tear that splashes into a painting of trees. I think we can assume that this type of cave painting style will be the intro to the game. Before Skyward Sword was released, Nintendo showed off a trailer very similar to this one. Where the introduction to the game was essentially shown in basically the same way.

The painting of the trees transitions to actual game footage of what appears to be different seasons. One tree looks lush and green like summer, while the next is very autumn-esque. Nature is a very prevalent aspect of this game and it makes sense to what they’re trying to accomplish. It may sound silly, but these two trees hint at seasons changing in-game. It highlights a living and breathing world, unlike anything we’ve seen in a Zelda game before.

Next we get our first look at some of the villages and people who inhabit them. You really get a feel for what type of world this is. It’s an almost apocalyptic version of Hyrule. With foliage growing on old and towering structures; it’s striking portrait of the world.

Finally we see big action scene, and a blink and you’ll miss it interaction. As Link is fighting a huge Moblin, in the background there’s a guy fighting another Moblin with him. This is all pure speculation, but does that mean we’re getting a battle companion? Not one in the vein of Navi or Fi, but someone who actually fights with you?

As the trailer continues we get a look at some of the new towns and what appears to be a place to rent and buy horses. The towns are keeping in line with the nature theme of the game, so far. Most of the buildings in the village look like they are a part of the landscape. In the case of this town, it all seems to be a natural extension of the mountain, since there are homes that blend in perfectly with the mountain itself.

Now things get a little more interesting, as a huge bird-like creature swoopes into the air with a large gust of wind. It files up to a clearly mechanical airship shaped just like the bird. The creature moves too fast to get a good look at it, but there are several things it could be. The first thing that comes to mind is a Loftwing from Skyward Sword. It has the same general size and shape of what they look like and it would make sense. There’s an outside chance it could be a Rito from Wind Waker, but it seems a little too big for that. It could also be something new entirely. Really interesting stuff, especially the big airship.

There are some new shots of the Guardians, before the most interesting part of the trailer comes into view. We see a female character with exactly what Link has worn in all of the trailers, so far. After first inspection you could assume it’s just this games version of Princess Zelda herself. But then another female character is shown at the end with a completely different set of clothes. It’s also worth noting the character is holding a Shekiah Slate, the main new item in the game that Link has. Are they finally giving us a female Link? That would be a huge inclusion into the series and shows a commitment to rethinking the conventions of Zelda. Though it’s probably Zelda, and fans are likely overthinking it.

The trailer ends with a montage of the destructive power of this game’s villain, The Calamity Ganon. This instance showcases the evil power coming from Hyrule Castle destroying anything in it’s wake. A glowing Link rises up before a great finale. The final shot is Link kneeling next to who we’re assuming is Zelda, who clinches her fist as if she’s about to fight. Powerful stuff.

Two things worth nothing in the trailer outside of its content. One, the music is incredible. It does a great job of providing the perfect feel for the game and provokes a lot of different feelings. Two, the Master Sword was shown a lot and was the main weapon Link had in the trailer. The Blade of Evil’s Bane always plays an important role in every game and that tradition is going to continue.

Overall, there’s a lot of great stuff to chew on here. There was still no official release date, but they did say 2017. This is shaping up to be an incredible adventure and I can’t wait to play it.