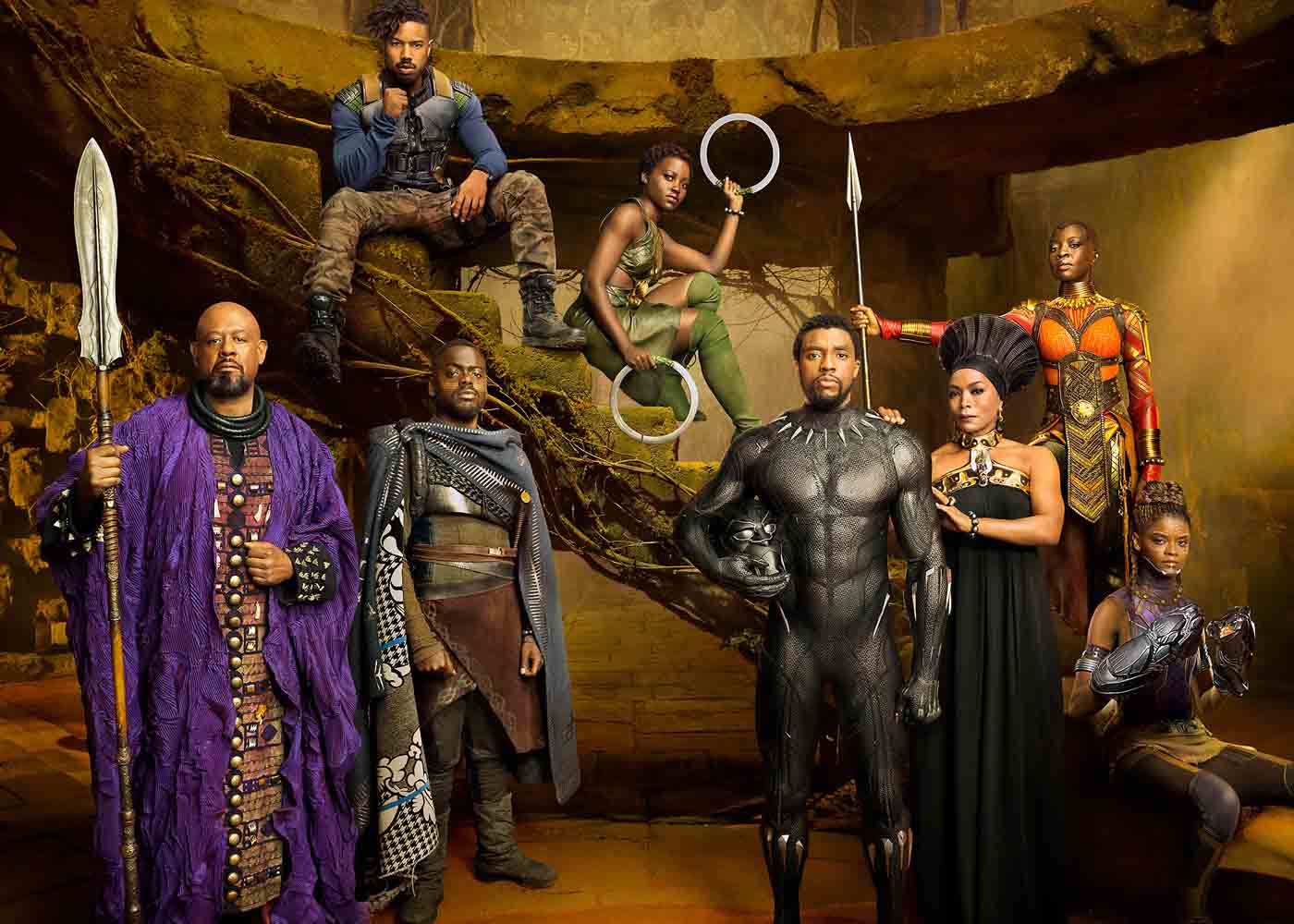 Marvel fans can get a sneak peek at the world of Wakanda, as Entertainment Weekly has released 20 photos from Marvel Studio’s eagerly anticipated Black Panther.

The behind-the scenes photos tease the film’s central conflict: newly crowned King T’Challa (Chadwick Boseman) defending his throne from challenger Erik Killmonger (Michael B. Jordan). Visible in these photos are Killmonger’s ritualistic tribal markings, a series of bumps across his torso. While these markings have drawn speculation from the internet, executive producer Nate Moore declined to explain them, saying “That is a story reveal that we’d like to preserve.”

Also featured in the photos, and seen above between T’Challa and Killmonger, are the Dora Milaje, the King of Wakanda’s all-female bodyguards. Movie goers got a glimpse of the Dora Milaje in Captain America: Civil War, when one of them briefly confronted Black Widow, but they are set to play a much larger role in Black Panther’s solo movie.

From left to right are Okoye (Danai Gurira), the leader of the Dora Milaje; Nakia (Lupita Nyong’o), a globe-trotting undercover Wakandan operative; and the king’s personal guard, Ayo (Florence Kasumba).

Also appearing in the gallery are two returning players from previous Marvel films. Ulysses Klaue (Andy Serkis), previously seen in Avengers: Age of Ultron, will serve as an ally to Killmonger, while CIA operative Everett K. Ross (Martin Freeman), who along with Black Panther debuted in Captain America: Civil War, will assist T’Challa and his family in stopping this alliance.

The full gallery can be found at ew.com or in their print edition.

Elsewhere on EW, Boseman and Marvel Studios chief Kevin Feige let slip some details about Black Panther’s plot. Wakanda is the most technologically advanced nation on Earth, and thanks to their deposits of super-strong metal vibranium (which was used to make Captain America’s shield) the wealthiest. However, they have hidden their wealth and power from the outside world, posing as another impoverished African nation. And T’Challa is a new king, still mourning the death of his father in Civil War. and feeling guilt in taking his place. While tradition suggests he withdraw, his life’s training as the nation’s guardian, the Black Panther, makes him reluctant to retreat.

Feige explains how the movie has great political relevance to the current state of the US. “Part of the story is about the isolationist state of Wakanda coming to terms with the modern day,” Feige says. “You get into conversations about refugees. You get into conversations about, ‘Should we help the people on the other side of that border, because they need help and we could help them… but it would potentially endanger us.’”

Boseman promises fascinating nemeses in Klaue and Killmonger. “Klaue is the real villain,” he explains, adding that Klaue’s knowledge of vibranium makes him dangerous. As to Klaue’s partner? “I can say that I identify with Killmonger’s character,” Boseman says. “It’s going to be a fun character. He definitely has a different point of view. They are polar opposites. A superhero movie is only as great as its villains. I think they both provide a piece of that.”

Moore said the film draws inspiration from two very different cinematic icons: James Bond and Michael Corleone. “What I think we landed on was sort of a cross between James Bond and The Godfather,” said Moore. “A big, operatic family drama centered on a world of international espionage. So hopefully we’re getting the best of both worlds.”