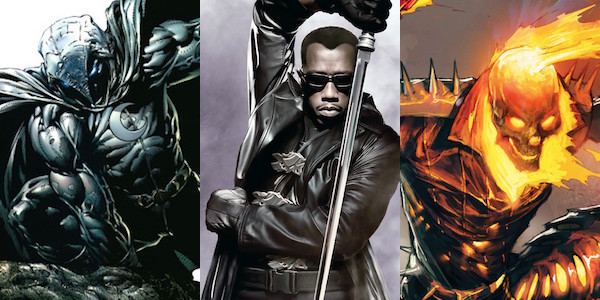 Marvel‘s output with Netflix just keeps growing and growing. Alongside Daredevil, Jessica Jones, Iron Fist, Luke Cage and team-up show The Defenders, Marvel also recently announced they would build a series around Jon Bernthal’s critically-acclaimed take on the Punisher from Daredevil‘s second season. If a new rumour is to be believed, however, there might be even more new shows on the horizon.

According to MovieCreedLive, Marvel is lining up three more characters for their own Netflix series. These lucky fellas are vampire hunter Blade, demonic biker Ghost Rider and mystically-resurrected vigilante Moon Knight. These three characters suggest the studio is looking to explore the supernatural side of its universe a lot more. This would make sense, given that this year’s Doctor Strange will introduce magic into the Marvel Cinematic Universe.

Marvelites might remember that two of those have been brought to the screen before. Blade was the star of a trilogy of movies in the late 90s and early 2000s, with Wesley Snipes in the title role. The character also had a short-lived spin-off TV series, which featured rapper Sticky Fingaz.

Ghost Rider, meanwhile, was brought to life by Nicolas Cage in two movies in 2007 and 2012. Unlike the Blade films which became cult favourites, the Ghost Rider movies are universally panned. This guy is definitely a character who needs the MCU treatment.

Moon Knight, on the other hand, has never been adapted to the screen before, neither in live-action or animation. This is a great shame as the character has a lot of potential. An appearance from him in the MCU has been on the cards for a while, actually, as some believe a reference to “a TV anchor in Cairo” in Captain America: The Winter Soldier was a nod to the character.

Once again, this is far from being confirmed – but wouldn’t it be so awesome if it were true?