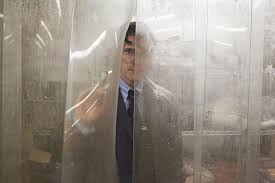 Lars Von Trier is a controversial film maker to say the least. Not only are his films controversial, but so is his personal life.

He has done a lot in his career spanning two decades. Von Trier has made award winning features. The director has had sexual harassment issues. He has won the Palme D ‘Or.  The Cannes Film Festival had him banned once. Arguably, the director is as polarizing as his creations. He continues to create unnerving pieces. In fact, his current feature, The House That Jack Built, is certainly not an exception.

After being banned from the Cannes Film Festival, Von Trier returns with The House That Jack Built. It’s a controversial pieces that has Starring Matt Dillon as the titular character. The movie revolves around Jack an intelligent but psychopathic character. The film shows Jack navigating 1970’s USA torturing and murdering women and children.

Reviews surrounding the movie has been less than stellar. In fact during the screening, a considerable number of people walked out on The House That Jack Built . Moviegoers left calling the movie unpleasant, disgusting, and vile.

“I’ve never seen anything like this at a film festival. More than 100 people have walked out of Lars von Trier’s ‘The House That Jack Built,’ which depicts the mutilation of women and children. “It’s disgusting,” one woman said on her way out. #Cannes2018″tweeted Ramin Seetodeh from Variety following the screening.

“THE HOUSE THAT JACK BUILT: I decided I’d had enough after about 100 minutes, which is when I left. I’m a critic but I’m also a human being, and I don’t have to play a part in somebody’s elaborate system of torture. #Cannes2018” tweeted Caspar Salmon, a film critic, after walking out of the movie.

Aside from the walkouts, the movie has received less than positive reviews from critics. Film professionals agree that the movie is characteristically Von Trier.

However, that doesn’t necessarily make it any good. Variety writer Owen Gleiberman criticized the movie’s mediocrity. It took the perspective of a serial killer. It failed to ground the story in a human way:

“Von Trier, to me, hasn’t made anything close to a masterpiece since “Breaking the Waves,” in 1996, and “The House That Jack Built” doesn’t spoil that record. It’s halfway between a subversive good movie and a stunt. It’s designed to get under your skin and does. But it would have gotten under your skin more if it offered a humane counterpart to Jack — if it didn’t remain so fixated on Matt Dillon’s disaffected zombie drone.”

Likewise, The Guardian’s Peter Bradshaw gave the movie a 2 out of 5 stars. Bradshaw lambasted the movie for its empty violence. He also criticized the film for other things like too much dialogue and poor story-telling:

“There is an awful lot of boring talking, talking, talking, a dialogue in American-English-Google-translated-from-Danish. Faces in extreme murkily lit closeup. Characterisation and narrative events that look improbable rather than mysterious or strange.”

The House That Jack Built would premiere in Denmark on November 29, 2018.