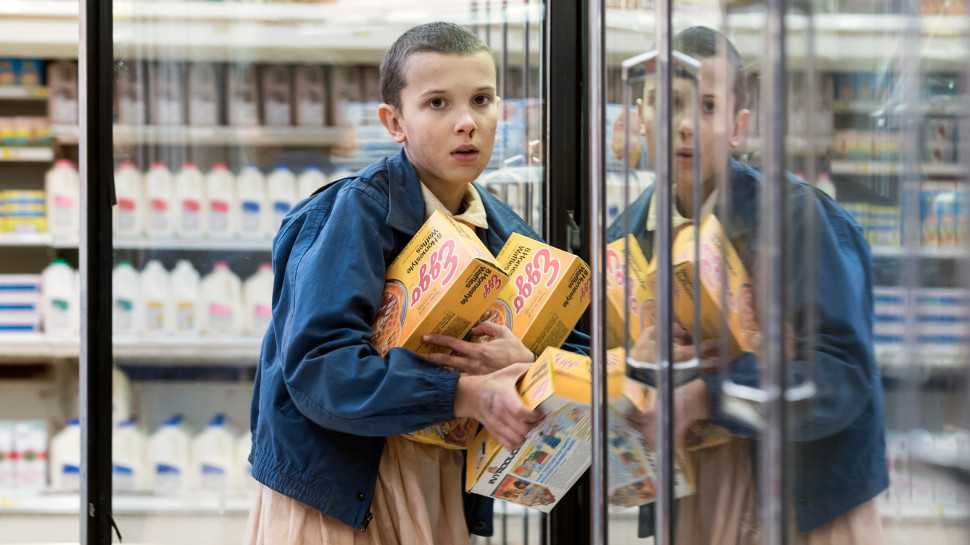 We’ve gushed plenty about Stranger Things and Millie Bobby Brown’s mesmerizing breakout as Eleven. To add more awesomeness to the phenomenon that is Netflix’s latest hit, the actress has shared a video of her getting her head shaved for the Eleven role. It’s short, but sweet. Beyoncé’s Pretty Hurts playing in the background is just the icing on the cake.

Here it is!! The video of me getting my hair shaved for #StrangerThings. Enjoy!😘💙 #buzzedpic.twitter.com/qFQWwib1ti

She admits to being reluctant at first. In a recent interview with IndieWire, Brown discussed how The Duffer Brothers, the show’s creators, encouraged her.

“I sat in the chair, and, one by one, they cut it off. I was like, “Oh no. What have I done?” And they told me, “I want you to have the mind-frame of Charlize Theron in Mad Max.” And we did this sort of split-screen of her and me, and the resemblance was amazing! I thought, “Wow, that’s such an amazing way to put it, you know?” It was the best decision I’ve ever, ever made.”

In a phone interview with Breaking Bad’s Aaron Paul for Elle, Brown revealed when she found Eleven was meant to have a shaved head.

“Actually they were very clever. I got the call back and then I did a Skype meeting and there was nothing at all about head shaving! And then we flew over to L.A., and they were like, ‘Are you ready?’ And I was like, ‘For what?’ And I was next to Finn [Wolfhard, who plays Mike Wheeler], and Ross Duffer comes up to me and puts his hand out and goes, Bzzzzzzzzz. And my mom’s like, ‘No! That’s not happening.’ And I was like, ‘Mom. You need to chill out; it’s gonna grow back.’ My mom was against it. And me and my dad were like, ‘Come on. It’s fine!’ Today, actually, we went to an Indian restaurant and someone was like, ‘Hello, young man.’ That was like the 500th time someone called me a boy, and I’m really fine with it.”

Thankfully, it all worked out and Stranger Things remains a hot topic. There’s a lot of mystery surrounding Eleven’s fate and the truth behind the return of Will Byers. Though Netflix has yet to renew the show, The Duffer Brothers have spoken on their plans for a hypothetical Season 2. Hopefully our burning questions will be answered soon.