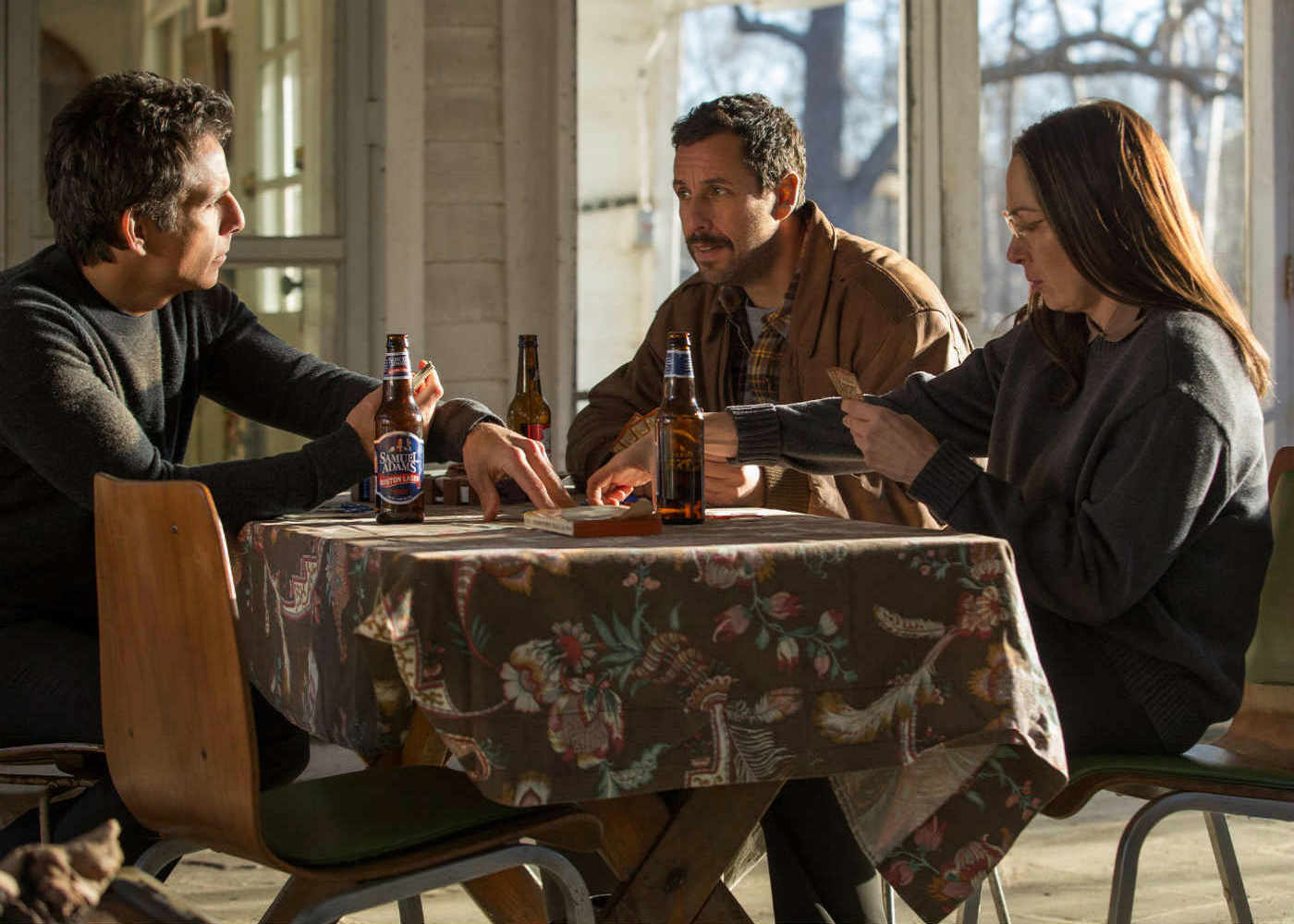 Noah Baumbach’s The Meyerowitz Stories is a film about streaks; it continues the unbroken directorial success rate of the lauded independent filmmaker following Frances Ha, While We’re Young, and Mistress America, but it also signals the end of Adam Sandler’s run of stinkers.

Acknowledging that there is an audience for his particular brand of comedy, with not a whiff of cinematic snobbery intended, Punch Drunk Love feels like a long time ago, and Happy Gilmore and The Wedding Singer even longer. When Sandler is funny, he’s very funny, and Paul Thomas Anderson’s 2002 movie proved he could act, but for a while now its felt like he’s been slumming it. However, praise for The Meyerowitz Stories won’t be used to bash Sandler for his cinematic sins, for while he is incredibly good in it, this is the kind of idiosyncratic comedy that Baumbach does best, and features equally impressive turns from regular collaborator Ben Stiller, an eccentric Emma Thompson, and a requisitely annoying Dustin Hoffman.

Broken into a series of time hopping chapters, each given their own quirky title, the stories of which are centred around the fractured Meyerowitz family. There’s abrasive patriarch, Harold (Dustin Hoffman), who has twice married the same woman amongst four failed marriages, but who currently lives with relapsing alcoholic and terrible cook, Maureen (Emma Thompson). He has two children from his first marriage; Danny (Adam Sandler), a recently separated house husband who has a very close relationship with his grown up daughter, Eliza (Grace Van Patten), and Jean (Elizabeth Marvel), who nobody knows too much about, mainly due to her rather guarded personality. Then there’s his favourite, Matthew (Ben Stiller), a successful businessman who lives in Los Angeles and rarely comes to visit. Through the course of the film we see them eat raw shark, attend an art gallery where they meet Sigourney Weaver, and do what all families do; laugh, cry, and fight, really badly.

Baumbach has always been great at making the audience feel like they’re peering through a window and watching something as close to real as possible. Sure, some of the characters are slightly obscure, but not in a Wes Anderson way. Everything is executed in such an underplayed nuanced fashion that it’s like sitting back with your favourite pair of slippers on and watching your own family interact. Brothers who’re squabbling one minute and then praising each other the next, or a sister who emotionally extols the reasons that she has stuck with them through thick and thin, but then shuns an awkward hug in favour of a cigarette. Such small moments all play out in a delightfully naturalistic fashion.

The way in which the Stories are structured is also rather playful. Instead of the onscreen chapters feeling like a familiarly kooky device, they’re utilised hilariously. Not only are they summarising headlines to innocuous routine events, such as Danny parking his car, but they’re edited as though they’re the punchline to a joke, particularly how they cut off Sandler mid-rant.

On Sandler, while he is very good at going postal, especially during the opening gambit in which he is trying to find a parking space, it’s in the quieter moments of The Meyerowitz Stories where he excels. Playing an all-round decent guy, he is the most accessible character of the bunch, getting a few moments in which he can actually show off his acting chops, and with Danny bookending the film, his arc is one of cathartic payoff for the audience, whilst also  perfectly capturing the ambiguity of life.

The rest of the ensemble get their moments too, with each character having their visage slip in order to show their character’s human face. Ben Stiller is particularly great at this. We’ve seen him play uptight family man before, and much of what he does here is familiar, but there’s a moment during which he has to give a speech, sporting a bloodied nose and grass stained head, which is possibly the best thing he has ever done, and turns his performance into something completely different.

If there are any complaints against The Meyerowitz Stories then they’ll come from those who aren’t attuned to Baumbach’s brand of storytelling, which is a little like coffee; if you don’t like the taste by now, you’re just not going to enjoy it. Admittedly, there is a noticeable slump when the chapters change pace, but this is largely down to the strength of Sandler’s opening segment, and Hoffman’s performance, as good as it is, and integral to the story, can be a little grating at times.

A wonderful slice of grown-up filmmaking, featuring rich characters, that are complimented by some career best performances from Stiller, Sandler, and Marvel, The Meyerowitz Stories are well worth your bandwidth usage when it arrives on Netflix this October.