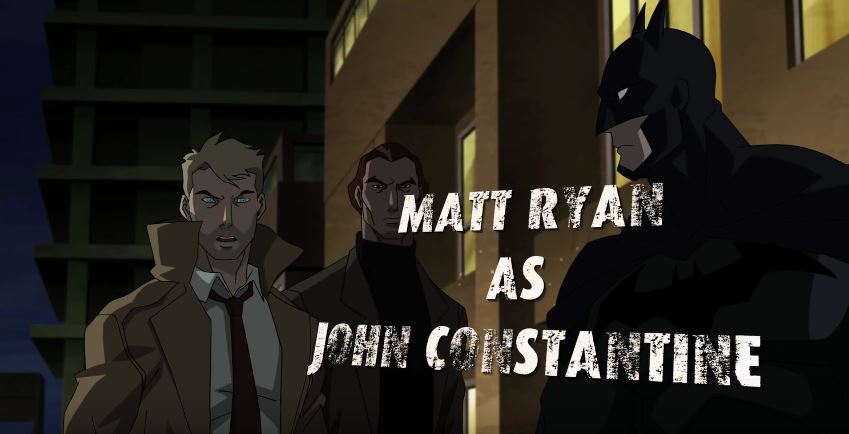 While the latest DC animated movie, Batman: The Killing Joke, might not have received as strong a reception as expected, a bonus feature released with the film has already got fans incredibly excited for the next one. Based on the supernatural side of the DC universe, Justice League Dark‘s premise is enticing enough – but it also features a welcome return of a fan favourite actor. Constantine‘s Matt Ryan!

Despite gaining a cult following, NBC‘s Constantine was cancelled after only 13 episodes. This was a crying shame as devotees of the Liverpudlian Hellblazer took Matt Ryan’s comics-accurate performance to their hearts. Thankfully, he did go on to appear in a guest spot on Arrow‘s fourth season. And now he’s portraying the part again in Justice League Dark.

The casting news was announced in a sneak peak at the movie, that has also found its way onto Youtube. Have a watch of it below. It’s all interesting, but if you only want to know about Matt Ryan, he turns up at about the 6:40 time stamp.

“I really wanted to jump into this project to play Constantine in a different context, around some of the iconic characters that are in the DC ‘dark’ world,” explains Ryan.

As well as Matt Ryan, the cast includes Camilla Luddington as Zatanna, Nicholas Turturro as Deadman, Ray Chase as Etrigan the Demon and Jason O’Mara as Batman (yes, of course, he’s in this one, too – he’s Batman!).

Justice League Dark is still under construction (as can be seen in the video above), but it is still expected to arrive on DVD, Blu-Ray and Digital HD at some point later this year. In the meantime, you can watch every episode of Constantine on CW Seed (if you’re in the US).