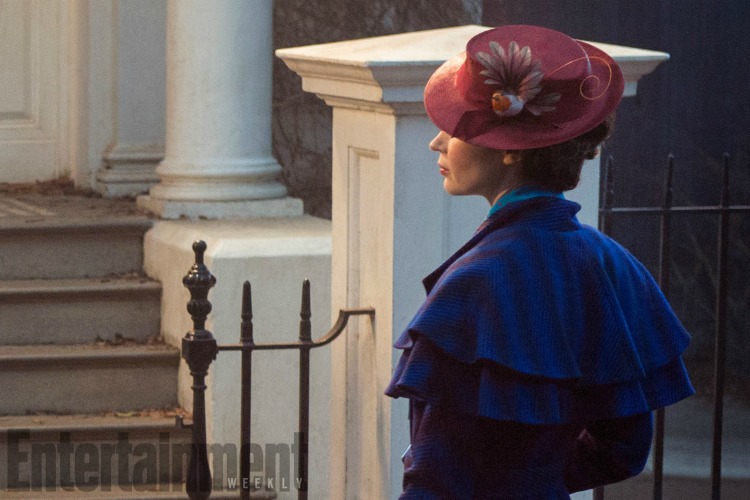 Supercalifragilisticexpialidocious! The first image for Disney‘s upcoming sequel to their classic 1964 classic Mary Poppins is finally here, giving us our very first look at Emily Blunt in character as the magical nanny.

The image comes courtesy of Entertainment Weekly. See it in full below: 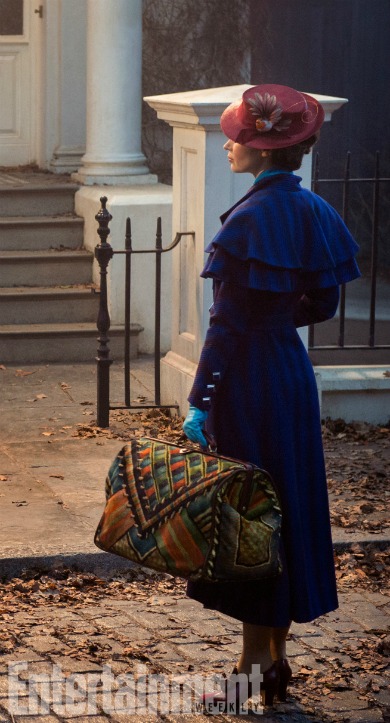 As you can see it, it features Blunt in an outfit that, while original to the new movie, feels quintessentially Mary Poppins-esque. Partly this is because of the feathered hat and ruffled coat combo, but also because of the blue-red colour scheme – two colours often worn by Julie Andrews’ original incarnation. She is also holding Mary’s famous carpet-bag, with its TARDIS-like inner proportions. She is most likely standing on Cherry Tree Lane, the home of the Banks family.

Mary Poppins Returns is set twenty years after the events of the first movie. It sees Mary return to the lives of the Banks family. This time, she visits the now adult Jane and Michael. According to EW, it “finds Mary Poppins returning to help the family rediscover joy after Michael suffers a personal loss.” The story is thought to draw more from P.L. Travers’ original novels, where Poppins would visit the Banks intermittently over the years.

Alongside Blunt, Ben Whishaw and Emily Mortimer star as Michael and Jane Banks. Hamilton‘s Lin-Manuel Miranda features in the Bert-like role of musical lamplighter Jack. The star power doesn’t stop there as Colin Firth, Julie Walters and none other than Meryl Streep will also appear (the later as Mary’s cousin Topsy). Lastly, the original movie’s Dick Van Dyke will pop up for a cameo (though not as Bert).

It is directed by Rob Marshall (Into The Woods. Pirates of the Caribbean: On Stranger Tides). David Magee (Finding Neverland, Life of Pi) wrote the script. It flies down on its umbrella and into cinemas on Christmas Day 2018.