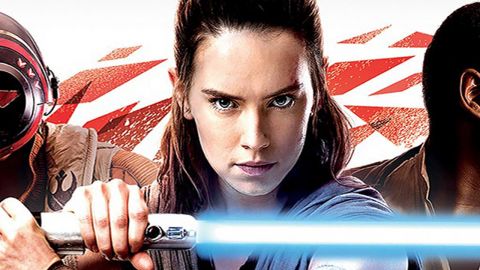 Star Wars is a franchise that bridges generations, and as the franchise has aged, the stories have continued to be imbued with new life not only by fans, but by a growing cast of characters over an ever-expanding number of films, books, shows and comics. 2015’s Star Wars: The Force Awakens (TFA) moved the series forward into a time when the Jedis had become all but legend, until a newcomer, the brave and mysterious Rey (played by Daisy Ridley) discovers the power of the Force within herself and accepts her destiny as one intertwined with the long-missing Luke Skywalker. But, what does this mean for Rey? What does her future hold now that she has found her calling as a Jedi? During a Star Wars Celebration panel held today, Daisy Ridley gave fans a little insight into what Rey’s interaction with Luke looks like in the coming film.

Ever since the final scene in TFA when Rey approaches the silent Luke Skywalker (Mark Hamill) and extends to him his lightsaber she inherited through the will of the Force (as a part of their yet unspecified connection) audiences have wondered exactly how Luke and Rey are linked. Rey’s past is still largely unknown, including even her last name. This, obviously, was one of the first questions Daisy received during the panel: how was Rey connected to Luke and what was her last name?

Daisy declined to answer any questions regarding Rey’s heritage (understandably), leaving Josh Gad to jokingly question why Daisy (as Rey) wouldn’t know her own last name. “Are you, like, the Madonna of Jakku?” he jibed, followed by laughter from the crowd. But, after Josh realized it was best to move on, Daisy did offer some information on how Rey and Luke would get on in The Last Jedi, following their meeting in the last film.

“Rey has a certain expectation as to what she might be getting from Luke and what that might entail, and as a lot of people know, it’s difficult when you meet your heroes because they might not be what you expect.”

As for Hamill’s return as Luke, he told Fandango that the Luke Rey finds will not be the same Luke audiences last experienced.

“Well he’s a completely different person,” he said. “He had an arc [in the original trilogy], and I think Carrie and Harrison admitted their characters were pretty much the same throughout, but Luke was always changing. Now we have this 30-year gap between the films, so a lot of if is conjecture. It’s not specifically my story – Rey is now the protagonist.”

As for any further details, we will all have to wait until Star Wars: The Last Jedi launches into theaters this December. At least for now, we have the trailer, which we took the time to break down for you all because we are also Star Wars obsessed.

As for what Daisy Ridley says she thinks fans will be most excited about in the next film: “I think we’ll all be excited for Luke’s first words.”