Picture this: The familiar beat of Wu-Tang Clan’s C.R.E.A.M is playing in the background as someone’s being closely followed from behind in an alley way. This person is dancing, rapping along. They pause for a moment taking in their favorite lyric, back up with enthusiasm, then Bam! they crash into the impenetrable Luke Cage. Will that happen in the show? Maybe, maybe not, but it’s possible in a way it never was before.

Showrunner Cheo Hodari Coker and Misty Knight actress, Simone Missick, spoke with Comic Book Resources, about the tone of the show, and explained how it will greatly differ from that of Daredevil or Jessica Jones. We’ve already seen plenty of Luke Cage, plenty, but there’s still so much more to the character that will be explored on his show. With the added flavor of ’90s hip-hop, the tone and the narrative will clash in interesting ways.

“The colors, the feel, the sounds — everything about this show is its own thing,” Missick told CBR. “Harlem is a character in this show. All the other shows took place in Hell’s Kitchen; this is the first one that’s taking place in Harlem, and you definitely feel that. You feel that in the music, in the conversation, in the characters, everything. It’s its own thing. Luke Cage is something completely new.” 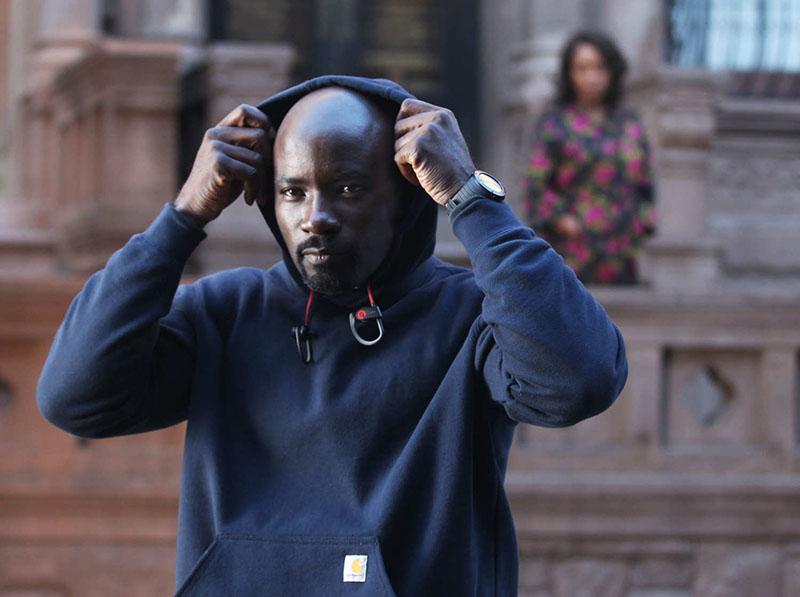 Coker also explained that fans of the comics can expect to see a very familiar world, even though they’re looking to exhibit a “modernized” take on the character. However, dealing with the fantastical could bring about challenges when telling a grounded story, and Coker, no stranger to grounded after his work on Southland and NCIS: Los Angeles, is aiming to maintain a bit of realism.

“For our show — yes, we deal with serious themes. Imagine what somebody with bulletproof skin, how that could affect the neighborhood when it comes to crime. We deal, in a very realistic way, with how that influences the neighborhood (without revealing anything). It’s grounded, but at the same time, the fantasy element of it also, I think, will attract people. We have something that’s very dramatic, but at the same time, we don’t run away from our comic book roots. We embrace them.”

With A Tribe Called Quest’s Ali Shaheed Muhammad co-scoring the series, the hip-hop vibe will certainly be set, it remains to be seen how well it will function on screen. This tone could reinvigorate superhero stories in an interesting way, but we won’t find out until Luke Cage begins streaming on September 30.