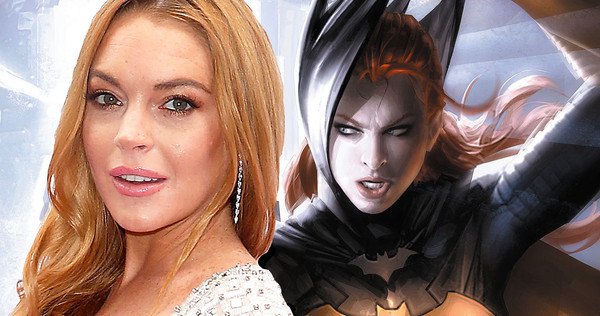 We reported last week that Lindsey Lohan has been throwing herself out there for a role as Batgirl and what we thought was maybe a joke seems to be serious since she keeps promoting the idea herself. Her last movie project, The Canyons, premiered in 2013 – almost five years ago.

In the update, she expressed her desire to play Batgirl – even tagging Joss Whedon, the director of the project:

Joss Whedon has yet to respond to Lindsey Lohan’s tweet. However, fans of the series have expressed their opinions on Lohan playing Batgirl. Because of her trouble and drug-riddled past, a lot of people have compared her to Robert Downey Jr. They argue that Lohan should be given a chance similar to how RDJ was offered the role of Iron Man that eventually revived his career.

Lindsay is a very talented actress, she would do amazing as batgirl no doubt. She just needs to get the chance. I believe in her 💕

However, there are a few who explained that RDJ was perfect for Iron Man. Lohan simply isn’t right actress to play Batgirl.

It’s not the fact that it’s Lindsey Lohan, it’s the fact she wants Batgirl for me. I just don’t see her as the character. I feel like she’d make a good Shimmer or Plastique for a SS sequel.

The search for the new Batgirl is still wide open. Whedon has yet to announce who he has settled on to play the iconic DC character. He, however, has explained that he is leaning towards hiring an unknown name to play the role:

“I don’t have my eye on anybody. I feel like I’m creating this character, I’m gonna dialogue with her, and then we’ll see who joins that later on… I doubt it will be a name. This is somewhere where you go and find Batgirl, and then you cast her. I’m not against movie stars, they’re great, but you need somebody who’s going to be just right. And a situation like this, the name carries a lot of weight, so it’s not as critical.”

Personally, I feel like I’d rather have a different director. It would be nice if Warner Bros. went with a new director or a female one like they did Wonder Woman. We like Joss Whedon enough, but I feel like his direction with women superheroes has been lacking.

In the meantime, several actresses seem to be in the running to play Batgirl. Hailee Steinfeld, known for her role on Pitch Perfect, and Jane Levy, from Suburgatory, are the current fan favorites. No specific date for the Batgirl premiere has been released or confirmed. Whedon has explained that he would be working on the movie in 2018. It is speculated that DC’s first super-heroine film would hit the theaters in 2019 or 2020.

What do you think should Lindsey Lohan get a chance? Should the movie just not get a green light? Would you like to see more female superhero movies? Leave your comments below.