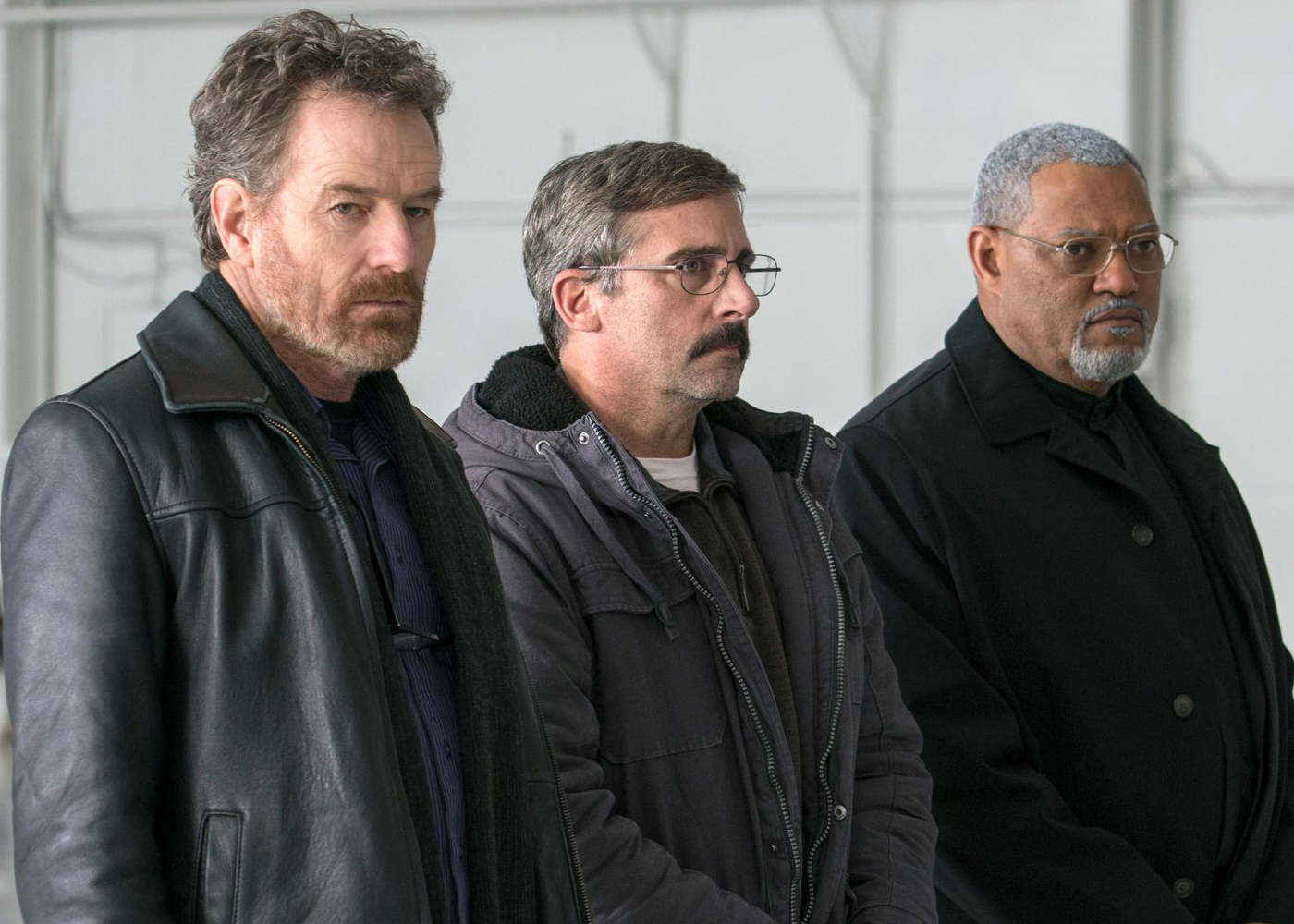 Richard Linklater‘s latest film is as much an examination of growing up as his Academy Award winning Boyhood, but Last Flag Flying takes the form of a coming-of-old-age road movie, which tackles familiar dichotomies about the fallacy of war and repackages them into a delightful bittersweet tale.

The year is 2003, and seated at a rundown bar we find Larry (Steve Carell), a former Navy Corpsman better known as ‘Doc’ to his war buddies. One of whom is working behind the bar, veteran Marine and full-time motormouth Sal Nealon (Bryan Cranston). The two haven’t seen eachother for thirty years, and the meeting hasn’t happened by chance. Wanting to show Sal something, Larry takes him to see the third member of their triumvirate, Reverend Richard Mueller (Laurence Fishburne), before slowly, quietly revealing the heartbreaking reason why he needs his old Vietnam pals to accompany him on a reluctant journey; to bury his son.

While quintessentially Linklater, Last Flag Flying is probably the director’s most ‘traditional’ film since 2011’s Bernie. Gone is the free-form, rambling nature of Everybody Want Some! or the Before films, instead replaced by a more rigid narrative, which still happens to be full of the kind of naturalistic dialogue that has become his calling-card.

Because of this, Last Flag Flying, whilst dealing with incredible sadness and politically charged themes, still has the ability to feature some of the funniest sequences in 2017. There is an out-of-time conversation about how offensive Eminem is that’s hilarious, and a train cargo carriage exchange, during which the winded laughter of the cast feels genuine, and is easily replicated by the audience.

The beauty of the screenplay is that these scenes are sandwiched between some real heartfelt drama. Linklater has always been great at creating what feel like genuine human interactions, so to have his cast corpsing with laughter one minute, only to cut to them being melancholically reflective the next, is true of life itself. They don’t always get it right though, and Yul Vasquez as the by-the-book Colonel is a jarring misjudgement of tone.

Undeniably brilliant are the main cast; Bryan Cranston gets the grandstanding role, as the charming reprobate he speaks his mind, in both an offensive and contemplative way. Having him at the top of his game delivering Linklater lines – “we were all someone once, now we’re something else” – is a terrific combination. If he’s the devil on Larry’s shoulder, then Laurence Fishburne is the angel, and the two butt heads terrifically. Between the three of them there’s a secret from the past that bubbles beneath their relationship, which ultimately doesn’t pay-off, but by the time you get to journey’s end, it’s not all that important.

The least showy performance, in fact it’s one shrouded in silence, comes from Carell, who is fast cornering the market in overt sadness. You almost forget he’s there amongst the big personalities of Fishburne and Cranston, but that makes the moments during which he finds the confidence and spirit to speak that much more powerful than his co-stars monologues.

Aside from the engaging character study, Last Flag Flying also acts as a war polemic, which doesn’t exactly cover any new ground, but does provide a platform upon which to build the narrative, as well as supply a few satirical laughs. Ultimately though it’s just once again asking, war, what is it good for? We already know that answer to that one.

Last Flag Flying will tap on the funnybone as much as it will prod at the tear ducts. A trio of outstanding performances compliment writer/director Linklater’s very human story.