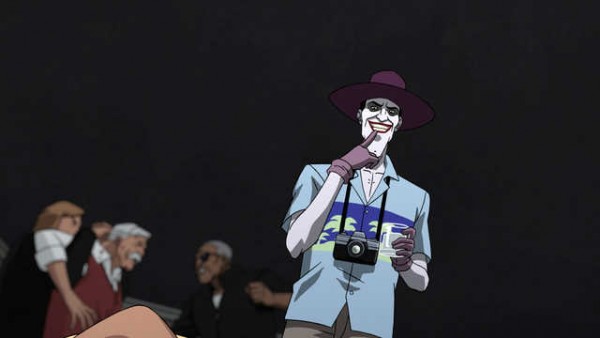 As if it wasn’t already clear, Bruce Timm and Co. are set to bring Alan Moore’s classic to life in the R-rated animated adaption of The Killing Joke. The film’s first clip features dialogue directly from the work. Kevin Conroy delivers Batman’s lines effortlessly, as tension mounts throughout the iconic scene. Mark Hamill’s Joker doesn’t speak, but he’s as menacing quiet as he is any other time. It looks great, sounds great, and the release date cannot arrive soon enough. The clip was a part of this week’s DC All Access, and begins at the 3:55 mark.

“What does it take for a person to snap? How much despair for a mind to fracture? These are the twisted questions that The Joker has set out to answer, to show Gotham that even an ordinary man like Commissioner Gordon is only one bad day away from sheer insanity. Based on the acclaimed DC Comics graphic novel, witness a journey into the dark psyche of the Clown Prince of Crime. Follow his humble beginnings as a struggling comic to his fateful encounter with the Dark Knight that changed everything. Fuelled by the return of Kevin Conroy as Batman and Mark Hamill as The Joker, witness the birth of a super villain, the fortitude of a hero and the punch line that will leave you speechless.”

The Killing Joke hits Digital HD July 23, and will have a one night only showing on July 25 in select theaters. Finally, the film will land on store shelves August 2, alongside a deluxe edition. The packaging’s special features can be read about here.