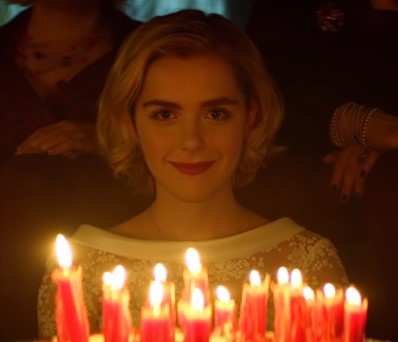 The highly anticipated Netflix adaptation of Chilling Adventures of Sabrina is only a couple of days from its premiere. Naturally, as the debut draws near, more details about the show have surfaced. Interestingly, Sabrina Spellman herself has gushed about the Netflix original.

In a recent sit down with Screen Rant, Kiernan Shipka aka Sabrina spoke about what fans should expect from the adaptation. According to the Mad Men actress, fans of ABC’s Sabrina the Teenage Witch should expect something entirely different. Their show is whole lot darker and more true to the comics than the Melissa Joan Hart adaptation:

“This show is way dark and way fun at the same time. And if people are fans of the more recent Chilling Adventures of Sabrina comics, they are going to kind of get the vibe and tone a little more. But at the same it takes a darkness of the most recent iteration of the comics and it blends it with so much funny at the same time and it just makes for such a wild ride because it just like an onion peel of different sort of tones and layers and it just all works at the end of the day.”

Kiernan further explains that soon as she got wind of the role, she dove into the comics head first. Hence why the show and her character is more like the graphic novel than the 90s show:

“When I got this I dove headfirst into the Chilling Adventures comics before I even auditioned. To get sort of a sense of the tone of what the show was going to be and the casting process happened quite quickly and by the time I got it I had about three months to prepare and sort of find the voice of the role. By myself, with a coach, working on the script maybe about three or four times a week. And at that rate I was so in it from that perspective that I didn’t want to go to any other sort of source material just because I felt like the world and the character of Sabrina that we are developing as much as it is an archetype, it’s its own character. She’s her own girl.”

Many fans of the source material are happy about Kiernan being casted as Sabrina. Nevertheless, Roberto Aguirre Sacasa, showrunner for Chilling Adventures of Sabrina and Riverdale, initially had different plans for the Mad Men alum.

In an interview with Entertainment Weekly, Sacasa explained that he initially wanted Kiernan to play Betty on Riverdale. The role eventually went to Lili Reinhart. This casting decision proved to be fortunate as Kiernan is perfect for the role of Sabrina:

“She felt like the right actor at the right age at the right point in her career and someone who was up for the challenge, because it’s grueling. She’s in practically every scene. But for me, Sabrina had to stand up to the Dark Lord, the devil, and these very formidable opponents and someone like Kiernan has the gravitas and the assuredness to be able to do that. I’d say she was my first choice for sure. For sure.”

The first episode of Chilling Adventures of Sabrina is scheduled to premiere on October 26, 2018.