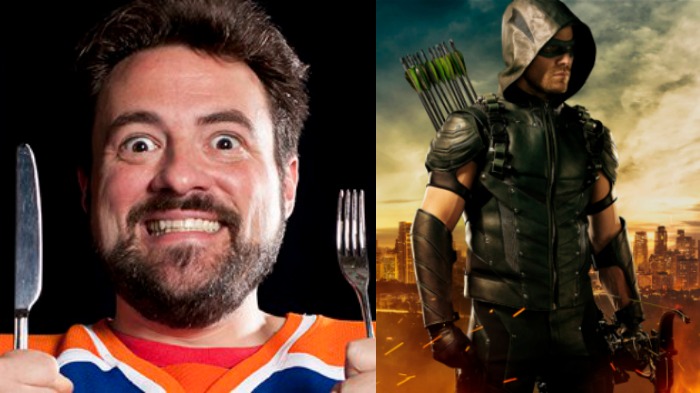 Mega superhero fan/acclaimed director Kevin Smith clearly had a lot of fun directing the latest episode of The Flash (he’s even called it his best directing work). So much fun, in fact, that he has now announced he would like to work on The Flash‘s DC sister show Arrow as well.

When speaking to Variety, Smith was asked if he would like to write for The Flash next time around. Here’s how he replied:

“I prefer not writing the episode because what we were able to do with me not writing it was, at least for me, substantial and wonderful … just as a directing exercise, I was so happy with it. So I wouldn’t want to write on Flash. I would, though, like to write on Arrow. I would love to jump in for a one or two episode arc just to bring that Onomatopoeia character to life. That would be so badass – I created this character in the comics and then to do a live-action version of it that fit into their universe, fit into the run of their show? That would be exciting to me. That’s the one I can get my head around writing, but Flash, whenever they bring me back, I think I prefer somebody else doing it. I heard rumor that when I go back, I think Zack [Stentz] might be writing my script again, which would be amazing – we’d be keeping the home team together, so that’d be cool.”

In case you’re wondering, Onomatopoeia is a supervillain from Smith’s run of Green Arrow comics – a killer who speaks solely in, you guessed it, onomatopoeia. Zack Stentz, meanwhile, wrote the director’s Flash episode ‘The Runaway Dinosaur’, as well as the screenplays for Thor and X-Men: First Class.