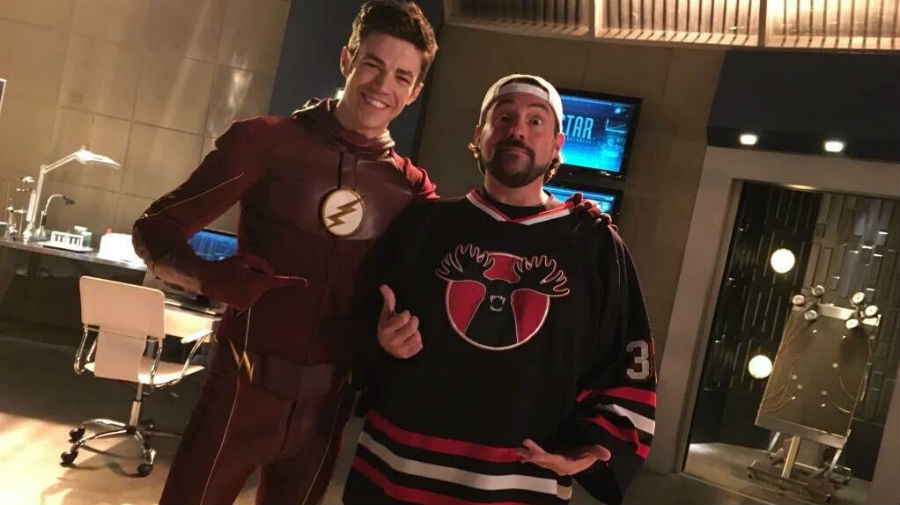 Fan favourite director Kevin Smith made a big impression on The Flash last season with his hit episode ‘The Runaway Dinosaur’ and we’ve known for a while that he would try and repeat that success in season 3. Thanks to some eagle-eyed fans, we now known the name of his upcoming episode.

Yesterday, Smith shared the front page of his script on his Twitter account with the title neatly covered up by a pen. He captioned it with: “I start shooting my second episode of @CW_TheFlash today! Big thanks to @AJKreisberg & @GBerlanti for another run!”

However, this was not enough to deter fans desperate for information from finding out the title. Be warned, the title potentially contains big spoilers for the episode, so this is your last chance to look away. Got that? OK, good. Here goes.

@Neonyfy@GBerlanti@ThatKevinSmith@CW_TheFlash look at the top of the page. You can make out “Killer Frost” pic.twitter.com/Qq6tPWffIz

That’s right, the title of Smith’s episode is ‘Killer Frost’! As any The Flash fan will know this is the alias of Caitlin Snow’s evil doppelganger from Earth-2. In that reality, she became a metahuman with freezing powers rather than the loyal employee of STAR Labs from Earth-1. A minor subplot of season 2 saw Cisco worrying that Caitlin was growing colder and becoming more like Killer Frost. Seeing as Earth-2’s Caitlin is now dead, it looks as if Cisco’s fears are about to come true…

Kevin Smith is also lending a hand on another The CW superhero show this season, as he will direct an episode of Supergirl. That title has also already been confirmed. It is ‘Supergirl Lives’, a reference to Smith’s unmade Superman film from the 1990s titled Superman Lives.