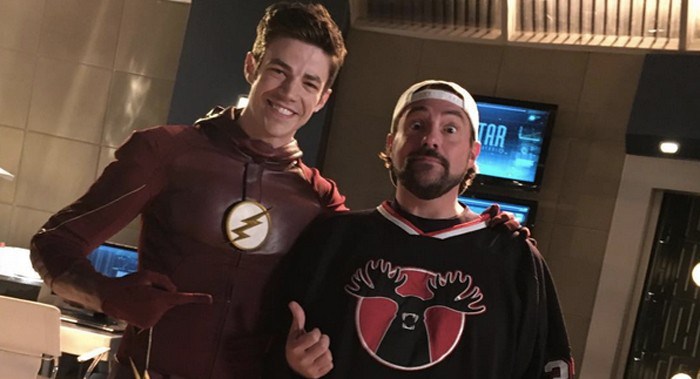 Audiences are typically divisive when it comes to discussing Kevin Smith’s work, truth be told, he often is as well. Hate it or love it, the man’s passion for his craft is undeniable, as is his passion for CW’s The Flash. Smith adores the show. He’s recorded videos of himself crying while watching the series’ most poignant moments; it may not seem like much, but it likely had a factor in him getting to direct one of the show’s upcoming episodes.

In an episode of his Fat Man on Batman podcast, the director shared a tease with co-host Marc Bernardin, saying it may be his best directing work to date.

“It is wonderful, dude. First cut was 55 minutes, of my episode of The Flash that I directed. We got it down to the running time, it’s 42 minutes. It may be my favorite thing I’ve ever directed. Now that doesn’t mean like I suddenly don’t like the movies that I directed. I wrote and directed those things. But this, just as a directing exercise — removing scripts and sh*t like that and about how I personally feel about material, whether or not it generated from me — I think this is hands down my best directing job I’ve ever done. Just directing. I feel good, and I’ve gotten some nice praise from upstairs. Sounds like I will be able to go back, unless they catch me with… a dead girl or a live boy. I think I’m gonna be able to go back… Boy oh boy, it turned out well. I’m very very happy,” Smith continued. “This is going to sound gross, but I’ve watched it no less than 50 times. It really holds up.”

In jest, the filmmaker noted fans shouldn’t be worried he may have ruined The Flash, he wanted to do justice to the show and fellow audience members. His giddiness makes it all the more believable, but we’ll have to wait to judge for ourselves. Smith directed episode 21, which is still untitled and will air next month on May 10.

His discussion of the show begins at the 19:45 timestamp.