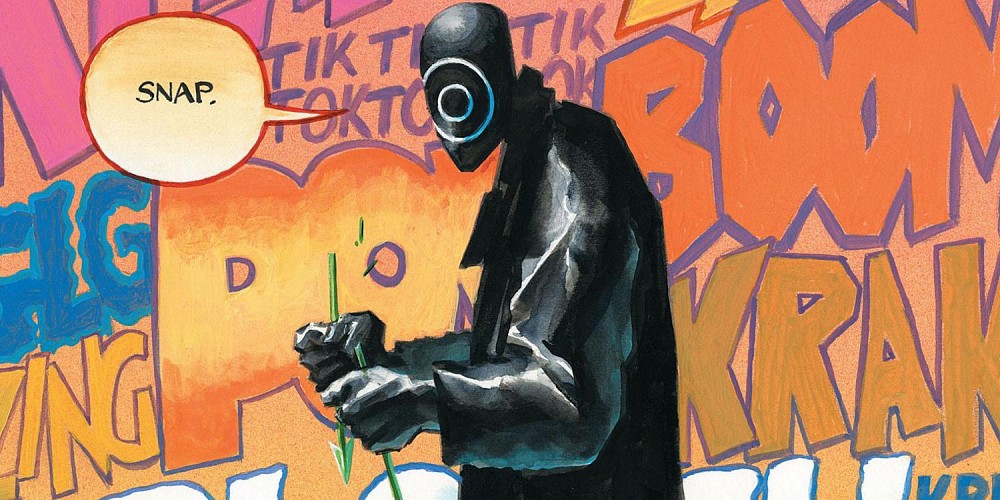 Back in 2002, the Clerks director was writing Green Arrow comics and created a new villain for the Emerald Archer to face — Onomatopoeia. As the name suggests, this supervillain’s gimmick was that he would enunciate the sound of the crime he had committed. For instance, if he blew something up, he would say ‘boom’. The character isn’t one who would naturally work off the page, but Smith knows just how he could adapt him.

Speaking to Den of Geek, Smith explained his new idea for Onomatopoeia:

“I’ve figured out a way to do it that is kinda bad-ass, and also connects to comics more or less. So instead of just doing the actual sound – which to me, in the real world, would be like the dude from Police Academy making noises with his mouth – he’ll just have little cards. Business cards that have typewritten words of whatever the fuck. So instead of him saying ‘blam’, you’d find this card on your desk and turn around and ‘blam’, he’d shoot you and stuff like that. Which I think is a little more chilly, you know, for doing it in live action. “

Sounds like it could work! Sadly, we won’t be seeing Onomatopoeia in Arrow Season 5, as Smith is still trying to get himself noticed by the production team.

“I know I’m going back to The Flash, first week of September, to direct episode 7 of Season 3. Still haven’t heard anything back from Arrow. You know, I wish, it would be amazing because I would love to write and direct Onomatopoeia in the show. Um, but I know they’re doing – what is it? – Wild Dog this year, as well as Vigilante, so maybe they’re just like ‘we don’t need you’, or whatever. But, at the moment, anyone over there raises a flag; I’m like ‘please, let me in!’ That’d be fun as fuck.”

Still, at least we’ve got that The Flash episode to look forward to. If it can match The Runaway Dinosaur, we’ll be in for a treat.

Arrow shoots onto our screens October 5th, while The Flash arrives even earlier (naturally) on the 4th.