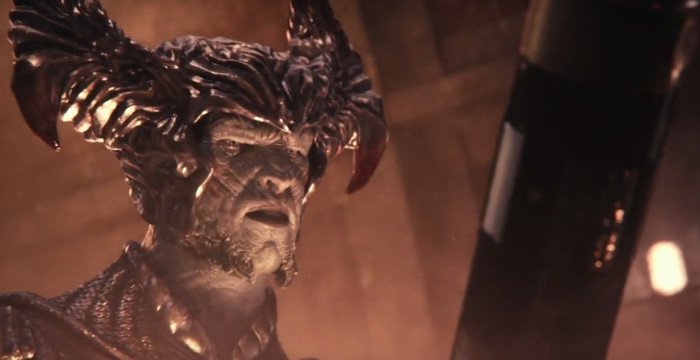 Probably one of the worst things about the theatrical version of Justice League was Steppenwolf, and even actor Ciaran Hinds has expressed his disappointment when it came to that version of the character. Zack Snyder promises the ‘original’ version in his cut of Justice League, and he just teased us a low-res image on Vero.

Zack Snyder has shared a tease of Steppenwolf from his ‘JUSTICE LEAGUE’ film.

“Just working today pulled this out of the editorial sorry he’s Low resolution but I’ve seen him in all his hi-Rez glory and he’s a thing to behold.”

As you can see, it’s a lot closer to the Steppenwolf that was teased in the Ultimate Cut of Batman v Superman: Dawn of Justice. It looks like this scene is the one where he drops in on the Amazons and steals the one of the Motherboxes.

We don’t really know why Joss Whedon or WB would want to change the design of the character, but I guess they wanted something that looked a lot more human. Either way, everyone seems to prefer this ‘beast’ that Snyder has come up with; we don’t know how he’s supposed to act as a character, but hopefully he has a lot more than some kind of mother complex.

If anything, I’m hoping that Snyder finds a way to make it more distinct than Doomsday from BvS. While that character does look amazing in some scenes, he’s just a big gray CGI monster (not unlike the bad guys from Suicide Squad, Iron Man, each one of the Deadly Sins in Shazam!). I’m thinking it’s the characterization that’s really going to shine, but we won’t know until we see it.

No specific release date has been announced, but Zack Snyder’s Justice League is set to hit HBO Max early 2021.