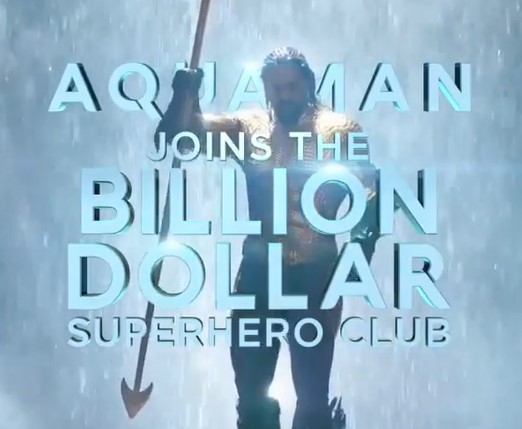 Aquaman debuted worldwide last December. While it has only been less than a month since its theatrical release, the DC movie has proven to be a behemoth in the box-office. In fact, this week, Aquaman has crossed the billion dollar mark. Unsurprisingly, the cast and crew can barely contain their excitement over the legendary feat.

On his personal Twitter account, James Wan, the movie’s director, thanked DC fans for their continuous support for the movie. Wan gushed about the milestone. According to the director, no one could have anticipated such a non-mainstream character to make it this big. If not for the fans, it would not have been possible:

“THANK YOU from the bottom of my heart to everyone who has supported this underdog. For making this non-mainstream character (and yes — with leading POC individuals in front and behind the camera!) connect on such a huge global scale. In the words of Aquaman himself, “MAHALO” 🙏.”

Likewise, Aquaman himself, Jason Momoa, took to Instagram to express his deepest gratitude for the support his movie has gotten. In the post, Momoa thanked not only the fans but also directors Zack Snyder and James Wan for choosing for the role of a lifetime:

“BILLION DOLLAR UNDERDOG. from baywatch to making what once was the most disrespected superhero into a billion dollar movie. no one gets to the top without the people that love them. My success is from my fans. All my aloha to everyone that had a hand in making this movie. Mahalo Zack for choosing me and mahalo James for creating this beautiful world. #grateful #lovemyfans #billiondollarunderdog #borntoclimb #outofholes #aquaman2 #cheeeehuuuuuu #hhrajahh. Aloha j.”

Earning a billion dollars in the box-office is an achievement only a few movies can boast of. Nevertheless, even without the feat, Momoa has always believed that it was a role that was meant to be his.

In an interview with Entertainment Weekly late in 2018, Momoa has explained that there was never any pressure in playing Aquaman. The character is in him:

“I have Aquaman in me, and he’s somewhere I don’t have to reach far to access. [Game of Thrones horselord] Drogo was harder to play, where I had to learn a different language and do certain things that I don’t think are right. I want to make Aquaman fans proud. A lot of the real Aquaman fans love him, and I love them for it. And some people don’t like him — my job was to kind of come in and make this guy cool. I was worried [at first] that maybe they wouldn’t like me. But they’ve responded really well. I was more nervous on Conan because there are the Robert E. Howard fans, and there are the comic book fans. And I did what Robert E. Howard did. Conan had people like, “who’s this little f–king scrawny rat?” So that was tough, but I feel like we embodied it the way that the original writer wrote it. With Aquaman, I think people will identify with him. I know I did. And James made it like Star Wars underwater and it’s beautiful.”