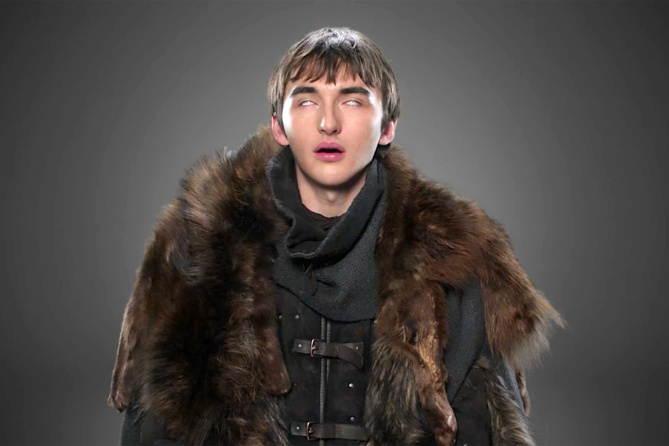 With a new season of Game of Thrones comes a barrage of new internet memes, and one of the most popular to come out of the first episode was ‘Creepy Bran.’ A lot of people have talked about how Bran now mostly just stares at people awkwardly in the show, and Isaac Hempstead Wright explains the reason behind his character’s supposed intensity in the HBO series—he just can’t see without his glasses.

“I’ve got this kind of intense stare, but it’s actually aided by the fact that I’m completely blind when I’m on set; I don’t have my glasses and I don’t have contact lenses… They’re not that thick, but I need them to see.”

Apparently, Hempstead got so creepy because of his blurred vision that even co-star Sophie Turner had to tell him. Wright continues:

“I could just remember I was doing one scene in Season 7 with Sophie Turner who plays Sansa, and she says, ‘Isaac, your stare is like, you’re staring into my soul,’ and I was like, ‘I can’t see you.’”

With Bran having seen one of the more intense character arcs in the story, it’s kind of cathartic to see that he’s kind of lost his humanity in order to become the Three-Eyed Raven. I’m still holding out that he actually ‘snaps back to normal’ somewhere between the show, but I also have a feeling that he’s going to be one of the prime targets of the Night King, seeing as he’s probably the only one on the Living’s side with any magical powers.

Catch Game of Thrones 8 on HBO every Sunday.