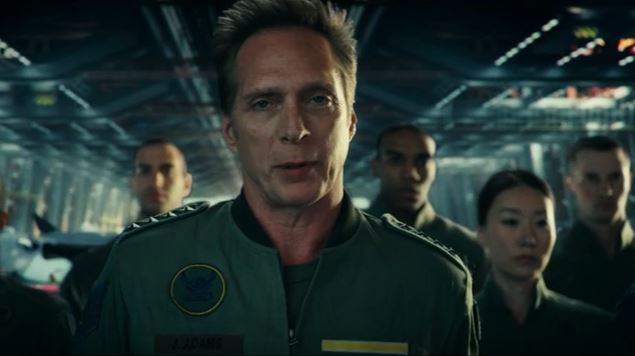 Independence Day: Resurgence, the long-awaited sequel to the classic alien invasion movie Independence Day, is currently enjoying some great promotional material. First there was the thrilling trailer, followed by a fictitious news report that reminded us of the events of the first film, and now a mock-up recruitment video – that wants YOU to defend the Earth.

The video tells us how in the two decades since humanity defeated the alien invaders, the world has become united in its fear of another attack. To counteract such an event, the Earth Space Defense has been formed to keep the skies of the planet safe. Commanded by General Adams (as played by William Fichtner), they are apparently after courageous people from around the globe to help them save the world.

You can visit the ESD’s site here, if you fancy signing up. Funnily enough, it is actually part of the US Army’s official recruitment website, as they are sponsoring the video. Here’s the statement that went with the promo, in case you are not inspired to join up just yet.

We always knew they were coming back. After INDEPENDENCE DAY redefined the event movie genre, the next epic chapter delivers global spectacle on an unimaginable scale. Using recovered alien technology, the nations of Earth have collaborated on an immense defense program to protect the planet. But nothing can prepare us for the aliens’ advanced and unprecedented force. Only the ingenuity of a few brave men and women can bring our world back from the brink of extinction.

Independence Day: Resurgence shares director Roland Emmerich and stars Jeff Goldblum, Bill Pullman and Brent Spiner with the original movie (though sadly not Will Smith). Joining them will be Liam Hemsworth, Vivica A. Fox, Charlotte Gainsbourg and Judd Hirsch among many others. It will invade cinemas on June 24th, the 20th anniversary of the release date for the first film.