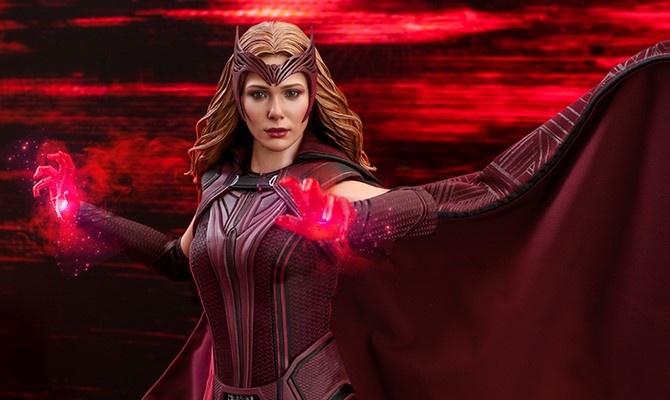 While Wanda Maximoff may have been in the MCU since Age of Ultron, she has only really gotten the spotlight with this year’s WandaVision. The show had just ended with Wanda earning herself a new comic-accurate outfit, and Hot Toys has revealed the full get-up with their new figure.

Check out some of the promo shots:

“This is Chaos Magic, Wanda. And that makes you the Scarlet Witch.” – Agatha Harkness

Trying to get to the bottom of Wanda Maximoff’s powers, Agatha takes Wanda off on a trip down memory lane reliving the past memories. Forced to go along with Agatha’s plan, Wanda unleashes her abilities to protect her loved ones, meanwhile gains a greater understanding of the full extent of her considerable powers.

Inspired by WandaVision, Marvel Studios’ original series, Hot Toys is excited to officially introduce a stunning 1/6th scale collectible figure of The Scarlet Witch and her brand-new costume with impressive details from the series finale.

Beautifully crafted based on the appearance of Elizabeth Olsen as Scarlet Witch in WandaVision, the figure features a newly developed head sculpt with specially applied luminous reflective effect on eyes to emulate Scarlet Witch using her abilities, long curly sculpted hair and her signature headdress, a newly designed body equipped with LED light-up function on both sides of the forearms, detailed outfit including the hooded cape, specially created hands with red translucent fingertips, Darkhold book, power-using effect accessories, and a dynamic figure base for display.

Reserve space for the Scarlet Witch figure from WandaVision collection!

While we already got a great look at the costume in the show, it’s these figures from companies like Hot Toys that really give fans to appreciate the subtle details in the outfit. For one, we know that Wanda has a cape in the show, but here we actually get to see that it comes with its own pattern to give it that Doctor Strange vibe.

Though Hot Toys is known for its attention to detail, I think this figure has a more tame hairdo than the one that Wanda sports in the finale—which looks a lot more like that gigantic 80s hair from the comics. Either way, it looks fantastic, and it’s likely that this will be her look when we get to Doctor Strange and the Multiverse of Madness.

Catch the complete WandaVision now on Disney+; Doctor Strange and the Multiverse of Madness hits theaters on March 25.