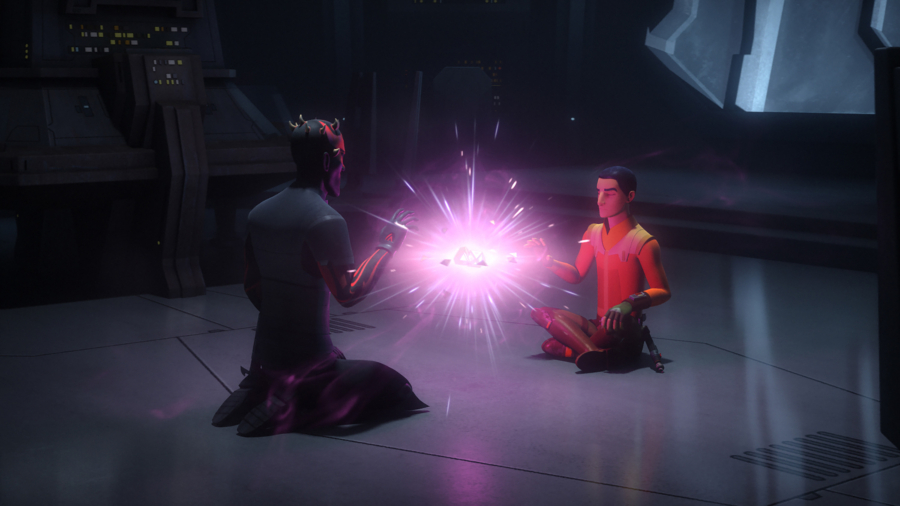 The second episode of the new season of Star Wars Rebels, continues the momentum from the premiere. In my review for the premiere, I talk about the new direction that the show is going in. A more adult direction that I thought would benefit the show immensely. The Holocrons of Fate prove that that is the case.

It picks up right after the events of the previous episode. Clearly Kanan and Ezra have begun to fix the riff that the evil Sith holocron had put between them. Their relationship is immediately put to the test when Maul takes the crew of the Ghost  captive. The former Sith Lord demands both the Sith holocron, as well as the Jedi holocron that Kanan kept. If he doesn’t get what he want, he’ll kill the entire crew.The only problem is Kanan gave the Sith holocron to the Bendu. The race is on the find the holocron, and save their friends.

Lets start with what works. First of all the relationship between Ezra and Kanan is great to see unfold. Clearly the pair have grown a lot over the past three seasons. Kanan is becoming a true Jedi and has given himself fully to their teachings. There’s a serenity to his character that just hasn’t been there. He has had a lot of inner turmoil since Order 66 and I love seeing this new side of him. He is a lot better teacher now as a result. The patience he exhibits while dealing with Ezra is exactly what the Jedi and Force represent and it shows a lot of growth for the character.

Ezra on the other hand has grown, except a little more akin to the way Anakin did. He is very confident in his abilities, to the point of cockiness and arrogance. When the two are going through the trial to find the holocron, he doesn’t do a whole lot of listening to his master. It’s only when he truly listens to Kanan where he finally realizes he needs to heed the advice of his master. This realization leads to an apology that is surprisingly heartfelt and sweet for a show like this. This is a very master-apprentice centric episode one that truly understand the two Jedi.

Onto Maul. Sam Witwer does an incredible job of bringing this Sith Lord to life. He takes a one note villain from the films, and turns him into a complex and compelling character. A character that you have no idea what his next move will be. There are some moments where you actually think that Maul is capable of good and you believe when he says he wants to help. Then he follows it with something awful and it’s so well done. Witwer is very good at Maul and understands the character.

I have a small nitpick with the new season so far. Where is Thrawn?! We were promised this iconic character and he was going to be front and center. So far that’s just not the case. He’s had 3 or 4 scenes in the first episode and is nowhere to be found here. I know it’s early, but he’s such an iconic EU character, lets see more.

Finally, that ending. After Ezra and Maul combine the two holocrons they see the future, and hint to some HUGE things to come. If you’re a true Star Wars fan like I am, the very mention of “twin suns” evokes a lot of emotions. The fact they hint at the events of the movies is such a cool nod to the universe. The big cliffhanger was what Maul may have learned from the holocron. After he leaves, he is in an absolute giddy state. Simply repeating “He lives” and “I found him”.Wait…are we getting an Obi-Wan v Maul rematch? Ok yep I’m on board.Keep this up!

"The Holocrons of Fate"

“The Holocrons of Fate” continue the momentum started at the premiere. With a great and dynamic relationship between Kanan and Ezra and the return of Maul this episode delivers.The ending leaves all sorts of possibilities and will make any true Star Wars fan giddy.