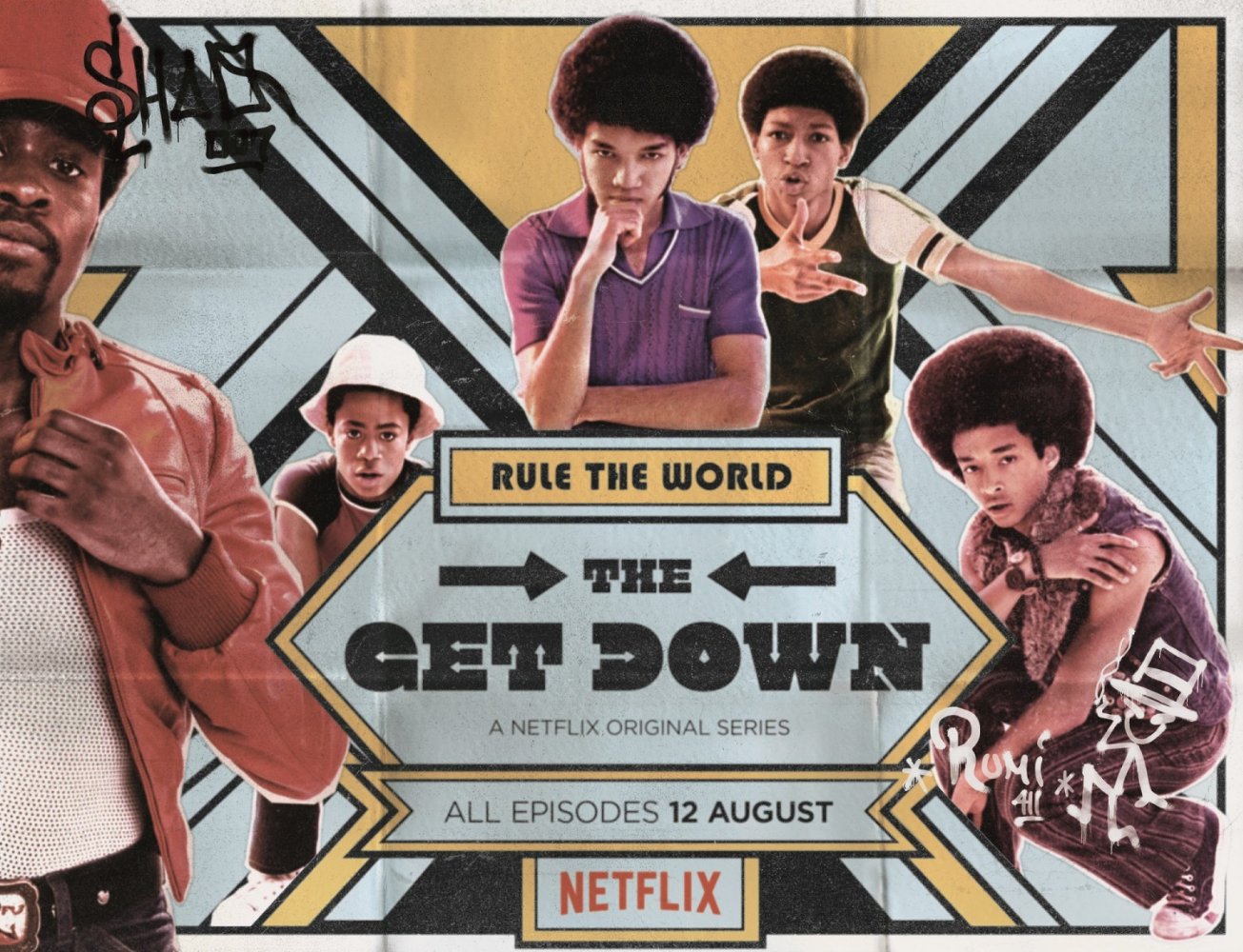 First of all, yes yes y’all, Cowboy’s in it. If you don’t know who Cowboy is, that’s all right, you will. In fact, by the end of this masterpiece’s first episode, you’ll know more about hip-hop than you thought possible. And if you’re set to ill, you just might fall in love.

It’s 1977, yet in the truly def parts of New York, the eighties are already happening, just waiting for disco to go away. Ezekiel (Justice Smith) is a high school student and budding poet, crushing like mad on the lovely, gifted songstress Mylene (Herizen F. Guardiola). Shaolin Fantastic (the great Shameik Moore of Dope) is a graffiti artist par excellence, already a legend in his field, but with an eye for the wheels of steel. In a run-in with the Savage Warlords street gang, Shao loses a precious remix record. Zeke winds up with it, and plans to use it to win Mylene’s heart. The battle over this MacGuffin leads our heroes to a dangerous disco, a Peckinpah/DePalma-inspired shoot-out, and the titular “get down” itself. We won’t spoil the first episode’s delicious ending, or anything else from this season. 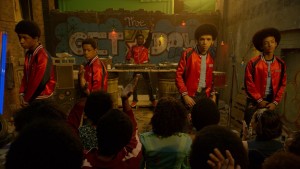 The actors are top flight. Smith’s lovelorn performance has more pathos than you’d expect, proof that teen characters can be believable. Moore is the perfect choice for Shao, constantly in motion, a hurricane of electric irony. Guardiola is a soulful ingenue who pours her heart into every line. Yahya Abdul-Mateen II is groovy and dangerous as the wicked disco king, Cadillac. And we’d be remiss if we failed to mention Francisco “Papa Fuerte” Cruz, played by Jimmy Smits, whose proficient presence gives credence to the otherwise unknown cast.

Luhrmann directs the pilot, with such hip-hop notables as Nas, Grandmaster Flash, and Kurtis Blow producing. His trademark, broad stroke approach is evident, but refined. Gone are the “what the fuck” moments from Romeo + Juliet and Moulin Rouge, replaced with an affectionate, often hilarious view of a past that, thanks to reference and reverence alike, never really left us. If Luhrmann’s films weren’t your thing, don’t worry. He’s found his medium with television, and your Netflix chill is all the better for it.

Stylistically, The Get Down‘s feature-length pilot is like an encyclopedia with ADHD. Like the culture it rightfully glorifies, it’s a fast-paced mix of everything that fed into early hip-hop. Breakdancing. Kung fu. Comic books. Jazz. Pop art. Sneakers. Star Wars. Rudy Ray Moore. Shakespeare. This is the b-boy bouillabaisse in motion, a mythic retelling of the late twentieth century’s greatest cultural landmark, Clash of the Titans by way of Krush Groove. Best of all, it’s a drama, not a history lesson. (If history’s what you’re looking for, check out Dan Charnas’s book, The Big Payback, and Ed Piskor’s comic, Hip-Hop Family Tree.)

If you have to ask why, you haven’t been paying attention. Hip-hop is everywhere, and if you love it, it’s everything. Pop culture at large has become the mixtape that never ends, more reference-heavy as the years go by. It’s easy to take for granted because there’s so damn much of it. Pop culture is culture now, and for the past four decades, hip-hop has been the glue that binds it all together. Without subway tagging, you have no Banksy or Shepard Fairey. If not for turntablists experimenting with breaks and loops, your friend with the laptop and a pirated copy of Sony Acid would just play video games. No breakdance, no mom dance.

Hip-hop has been around for about forty years, but with this show, it gains the respect it truly deserves. Hopefully, the series will continue, seeing our heroes move through the party rap years, into politically conscious hip-hop, gangsta rap, and beyond. The Get Down is the party of the summer, and it don’t stop.