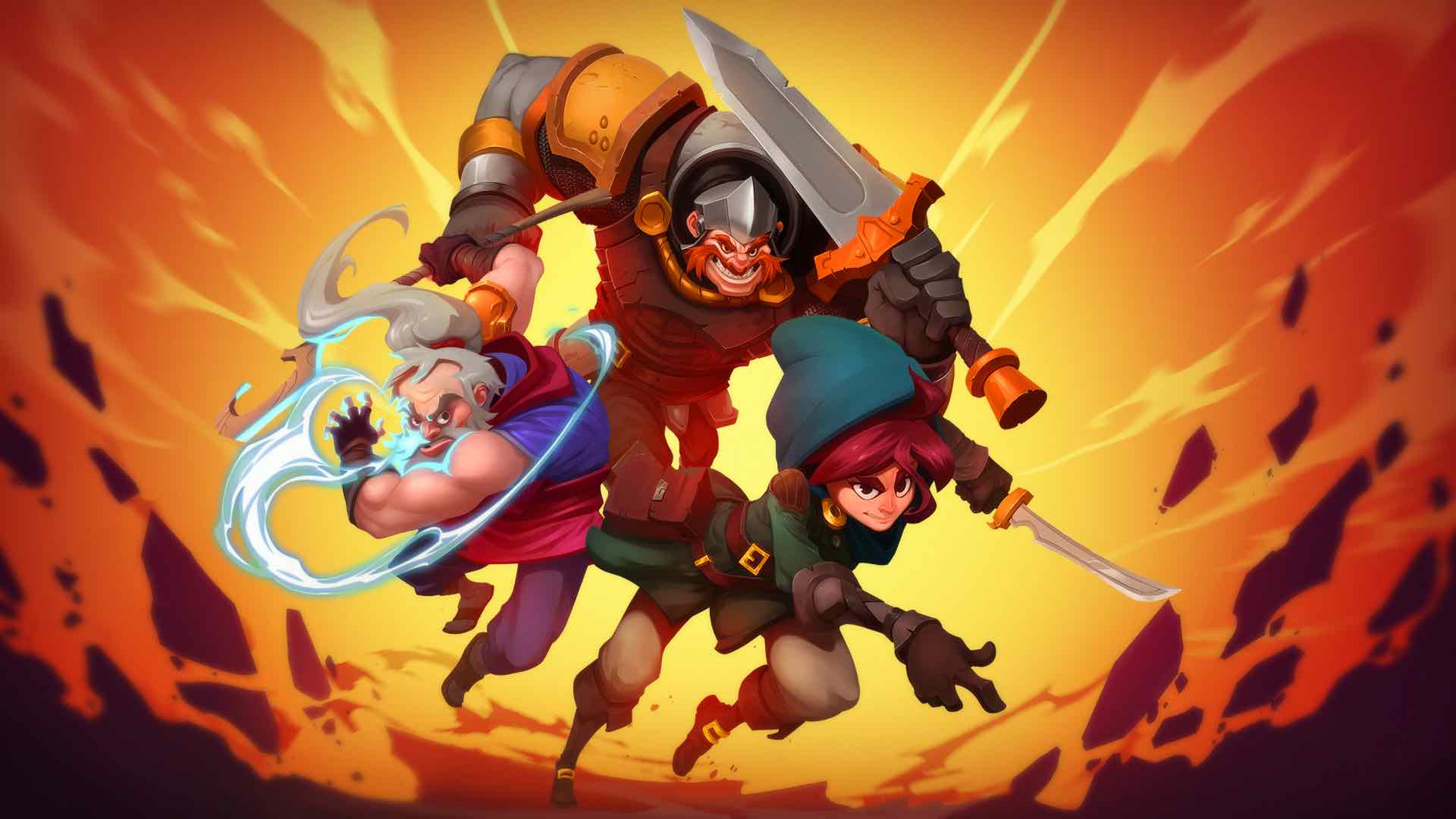 Has-Been Heroes is something of an enigma. It’s rare to come across a game so difficult to explain, both in terms of how it plays and why anyone would feel compelled to sink a great deal of time into it. Other than putting you in control of three characters at a time, Frozenbyte’s Nintendo Switch debut has very little in common with the developer’s previous work with the Trine series. Instead, it feels like something of a hodgepodge of roguelikes, tower defence, and turn-based RPGs. Unfortunately, it harbours very little of the appeal that the best of those genres have to offer.

In terms of setup, Has-Been Heroes serves up some incredibly uninspired fantasy fare, with the three eponymous characters – a mage, a rogue, and a warrior – sent on a quest by the ruler of the kingdom to escort his princess daughters across the land. From the dialogue to the music, it’s apparent that Frozenbyte is going for a whimsical vibe, but most will find themselves tapping the screen to skip through the exposition. Has-Been Heroes is at its best during quick pick-up-and-play sessions, so wasting time on blandly written cutscenes isn’t doing anybody any favours.

Progress is chartered by a map in the bottom right of the screen, which you move through one point at a time like a Super Mario overworld. Some points may not have anything to offer, others could have treasure chests or vendors to give out new equipment to improve the strength and abilities of the characters, but most trigger combat encounters. Battles play out like a cross between Plants vs Zombies and an old-school Final Fantasy, with the heroes spread out across three lanes on the left of the screen and attacked by enemies coming towards them from the right. The heroes need to chip away at the health and stamina of their foes to ensure they don’t get close enough to deal damage, with the key to success being swapping between lanes after each attack so to have each hero deal successive blows to a singular enemy. Going for multiple foes at a time is rarely the best bet.

The heroes take turns to attack, with each assigned to a face button, and getting into an effective rhythm of timing attacks and lane swaps to ensure a near constant bombardment upon enemies can be really exciting. But too often success and failure feel incredibly dependent on good fortune rather than skill. Enemies can arrive in huge numbers and some of them will switch lanes at random during a battle, and there’s no telltale sign as to when they will. It falls to the player to negate this problem simply by defeating them as quickly as possible, as there’s little in the way of defensive play. If an enemy reaches a hero, death will likely be extremely swift, and it’s at these junctures that the game’s roguelike structure comes into play. Every death results in a complete restart, with progress marked by the gear you’ve collected from vendors, chests, and looting foes during previous runs. Theoretically the heroes should be better equipped to survive more battles with each run, but the will to continue is neutered by Has-Been Heroes’ lack of variety.

With dying and replaying levels such an inevitability, the limited line-up of enemy types and environments is a serious issue. Falling foul of the same foes repeatedly is to be expected in a roguelike, but Has-Been Heroes would benefit from offering players more in the way of solutions. Progress is almost entirely reliant on getting better equipment, most of which provide passive enhancements rather than new skills and abilities. It means that advancement can often be hamstrung through sheer bad luck, as it’s possible to go through several runs without coming across gear that improves you sufficiently to make it through more battles than previously. The best way to mix things up is to unlock new heroes, but doing so requires finishing an entire run, which can make the whole game feel like something of a vicious cycle when things aren’t going to plan.

As a result, Has-Been Heroes is not a game that holds up particularly well during long play sessions. It’s undoubtedly better suited to an airport terminal or bus journey than it is to a sofa and home theater setup, not helped by the fact that the generic artstyle don’t hold up well on a big screen. With the Trine series having boasted some of the most gorgeous visuals on any system in recent years, Has-Been Heroes’ bland appearance is something of a disappointment.

Has-Been Heroes is its own worst enemy, with potentially interesting and sometimes satisfying combat hamstrung by a structure that too often sees progression impeded by repetition, a lack of variety, and sheer misfortune.