Now that the world has had the chance to enjoy Guardians of the Galaxy Vol. 2 (some of us multiple times), James Gunn has decided to be vocal about the film’s behind the scenes work. This includes an explanation as to why we didn’t see Nathan Fillion’s cameo posters, which were teased with blurry paparazzi pictures many months ago. Gunn posted on Facebook:

“One of my best friends in the world is Nathan Fillion. He’s been in every movie I’ve directed – even as a monstrous, perverted voice in Guardians of the Galaxy. I didn’t have a good cameo for him in Vol. 2 – and I wanted to bring him more fully into the MCU at some point, so I didn’t want to make him Aakon Guard #2, narrowing his chance of a more substantial role in the future. I really do love the character of Simon Williams/Wonder Man in the comics – a sometimes douchey actor/superhero – and could see Nathan clearly in that role (not because he’s a douchebag but because he’s great at playing one).

But, of course, in a movie set 99.9% in space I didn’t really have a place for him. So, in a small flash to earth I decided to put a theater playing a “Simon Williams Film Festival,” with six Simon Williams movie posters outside. Obviously, from the posters, he’s had a run of B movies. Most of them in themselves are Easter eggs of some sort or another. Unfortunately, the small section of the scene where they appeared slowed down the movie and I had to cut the Easter eggs from the film.

So that’s the full story. Nathan’s only cameo in the movie ever were these posters. I’ll post them all over the next few days.”

Unfortunately, these posters were the only Nathan Fillion cameo we would’ve seen, but don’t lose hope. Gunn also said: “And, yes, I think we can consider them canon for the MCU, and I hold onto hope that Simon Williams will rise again!!” 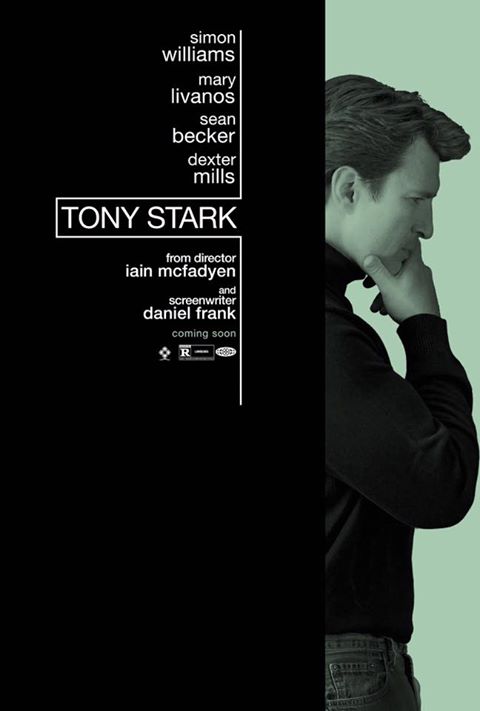 What’s most interesting is the other names that went along with Simon’s in this faux Tony Stark bio-pic. After a Google search, we can assume these names are referencing the following: Mary Livanos is the director of a 2013 short film called Commitment Issues, Sean Becker is an Emmy award-winning director whose short films have played in festivals all across the United States, Dexter Mills is referring to the rapper Consequence, director Iain McFadyen was Guardians Vol. 2’s art director (whose credits also include Phantom of the Opera and Star Wars Episode I: The Phantom Menace), and screenwriter Daniel Frank was an Oscar-winning film director, producer and screenwriter from Czechoslovakia.

Sadly, Iain McFadyen’s Tony Stark will not be making its way to theaters anytime soon, but you can watch Guardians of the Galaxy Vol. 2 in theaters now.