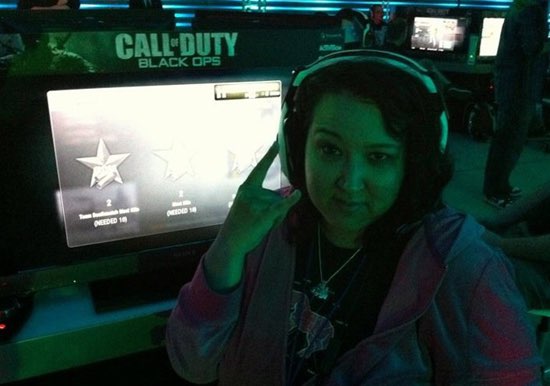 If you’re in the geek scene you probably already know Crix. She’s a whirling dervish of love for all things geek and gaming.

Cricket Lee aka Crix is a famous “fan girl“, gamer and an actor who loves doing voice overs. Her obsessions are her chihuahua Gizmo (named after the character “Gizmo” from the 1984 movie “Gremlins“), [adult swim], comic books, Star Wars, board games, her Xbox One, and beyond. She’s a big proponent of letting folks be exactly what and whoever they are… meaning no body or any other form of shaming allowed. When it comes to cosplay, she’ll be whoever the hell she damn pleases thank you very much. Crix loves good spirited debates, for instance “Who would win in a fight: JAWS or Godzilla?” (Feel free to debate that one in the comments below) She also loves hitting the occasional geek trivia night. “I prefer an “Omnibus,” or several issues combined into a volume, as I am super impatient and love to read it all at once instead of waiting every week.”

If you were a fan of The Guild, you might remember Crix from season 2, which as you can imagine was “an amazing experience!” She was also an extra on two episodes of NerdTerns (Nerdist), where she got to meet one of her idols Dan Harmon (Community, Rick and Morty).

Crix spent seven years at GirlGamer.com as Editor and Chief . She has seen the rise and fall of video game franchises and studios as well as the rise of the female gamer. “We are still out there having to prove ourselves time and time again, but those of us fought hard so that others could see the way of the girl gamer become a little bit easier. I despise that we’re always questioned about our knowledge on anything because we have breasts, but it doesn’t stop me from doing what I love.”

She was also co-host of a multi-award nominated geekcentric podcast called “Gecken”. “I’ve had the honor of not only doing a podcast with one of my oldest friends, we’ve been super fortunate to interview some of the geek greats.”

Damn, the gents hit the “Fuck it” button and went for it this final season of Workaholics and I friggin’ loved it.

You’ll see Cricket on Twitter retweeting her favorite celebs and icons. She loves Kevin Smith, “I can see myself in a lot of his characters. I’m Jay trapped in Silent Bob’s body, haha” and H. Jon Benjamin (Archer, Bob’s Burgers), “He sounds like the same guy in EVERY role but is able to make them ALL funny.” She’s inspired by Saturday Night Live’s Kate McKinnon, “She’s amazingly funny and one heck of a character actor.”

If you want to talk TV Crix never misses an episode of Gotham, “I nearly gave up on this show during season one, but am SO glad I returned, I am absolutely in love with Penguin and Riddler’s storylines.” Bob’s Burgers, “Who knew a cartoon about a family restaurant in New Jersey would so dang funny?! I also love their graphic novels (one issue even explains why there’s so many exterminators in their town, by the way) because we get to see really fun stuff that we don’t see on TV!” And Brad Neely’s Harg Nallin Sclopio Peepio, “This 15 min per episode show only lasted one season on [adult swim], but it’s something I could (and do) watch over and over again. I love animation.”

When it comes to films she’s a fan of the classics: JAWS, “It was one of the first films that broke my golden rule of “no harm to animals or children,” by eating a dog AND the Kintner within 10 minutes of each other.” The Life Aquatic With Steve Zissou, “I’m a huge fan of Wes Anderson and not only did he create a visually stunning movie where every animal talked about/seen in the film (outside of the research turtles and dolphin) doesn’t exist in real life, but it’s a movie about courage and believing in yourself when no one else does.” And Star Wars: Return of The Jedi, “The ultimate good vs evil vs gray area is something I can watch over and over because Ewoks. KIDDING! It has it all: a father/son battle, father redeems himself by sacrificing himself to save his son, boy finally getting girl, THEN Ewoks.”

Follow Crix on social and give her some love: