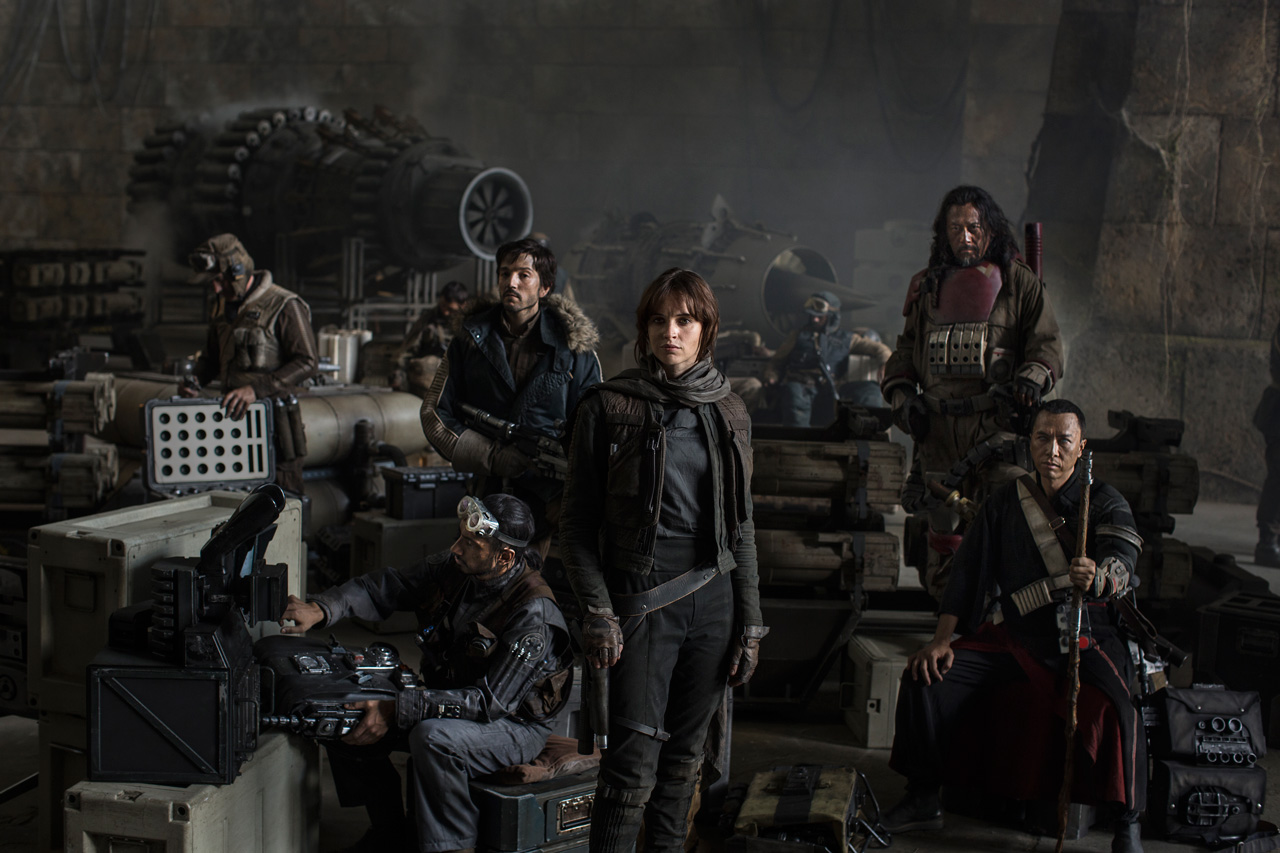 Many of us will remember 2016 for its seismic political shocks and an unprecedented number of beloved celebrities passing away, but it wasn’t all bad. While Assassin’s Creed may have ended the year on something of a bum note, the last 12 months were inundated with spectacular films across a host of genres for cinema-goers to enjoy. From original hits like Arrival, to superhero heavyweights like Captain America: Civil War, there’s plenty of competition for the top spot on GeekFeed’s list of the top 10 best films of 2016.

James Wan had proved himself to be a capable horror director before the release of The Conjuring in 2013 thanks to hits like Saw and Insidious, but the haunted house drama felt so refreshing in how it relied on the creation of incredible tension and atmosphere to terrify its audience rather than cheap jump scares and gore. Not to say there wasn’t any of that in The Conjuring, but it was made infinitely more effective by the expertly directed build-up.

Its direct follow-up, which once again follows Patrick Wilson and Vera Farmiga as paranormal investigators Ed and Lorraine Warren, is similarly superb. This time round it’s based on the infamous Enfield case, which sees a helpless London family terrorised by spirits in their council house. Performances are excellent from the two leads and major props must go to the children involved, not least young American actress Madison Wolfe as the possessed Janet Hodgson. It’s structural and thematic similarities to the first film naturally hold it back from making the same impact, but The Conjuring 2 is one of the very best horror sequels in recent memory. Annabelle, you are forgiven.

9. The Accountant (words by Brianna Reeves)

The Accountant initially struck a chord with its protagonist’s, Christian Wolff, cursory similarities to one Bruce Wayne. An autistic man with uncanny mathematical skills and an unnerving penchant for finishing whatever he begins, Wolff is an accountant who moonlights as an assassin for hire.

Director Gavin O’Connor’s thriller effortlessly weaves together the character’s double-life, which Ben Affleck plays brilliantly. Often emotionless and deadpan, not too dissimilar from the Dark Knight, when Wolff is forced to open up it’s never without a scene dripping of heart and overwhelming pain.

Admittedly, The Accountant overstays its welcome with its two plus hour runtime, leading to a question of pace and narrative filler in some instances. However, the twists and turns are well worth the ride. In a year seemingly inundated in crime thrillers, The Accountant is one that definitely stands out.

8. Hunt for the Wilderpeople (words by Matthew Rodgers)

For all of the over-familiarity found in the Marvel Cinematic Universe, the studio must be praised for giving directors who are largely known for independent fare the chance to take the reins on their tentpole movies. Obviously Edgar Wright might disagree, but Shane Black was given the Iron Man 3 gig, the Russo brothers graduated to the top of the pecking order, largely off the back of TV shows, and if you want to know why Taika Waittiti is directing Thor: Ragnarok, then look no further than Hunt for the Wilderpeople.

A comedy, drama, action, buddy, romance movie, all rolled into one creatively joyous whole, Hunt for the Wilderpeople is what cinema was designed for. Like an old story book, with the corners worn from turning the pages, it’s a riotous coming-of- age adventure with a wonderful central performance from Julian Dennison as incompetent juvenile delinquent Ricky Baker.

With a huge beating heart and pathos which runs through this tale of a curmudgeonly old man (a requisitely brilliant Sam Neill) and his reluctant cross country journey with his adopted son, everything from Tupac the dog, to Ricky’s off-kilter birthday celebrations will plant a face wide grin that won’t subside for hours.

Don’t Breathe came as a surprising and welcoming hit during the summer. Over the last several years, horror has seen its fair share of revitalizations and director Fede Alvarez’s latest ups the ante.

The premise of a few young thieves conjuring up a get-rich-quick scheme is simple enough. Three friends become aware of an older man living alone in what appears to be a run down house with a boat load of cash hidden away. The crux is the old man’s blindness, something they bank on making their score an easy get — easy it most certainly is not.

Stephen Lang plays the blind man ferociously, turning this seemingly simple scary flick into an angst-ridden thriller. The action comes in waves, as the film is often reminiscent of survival horror games like Outlast or Amnesia, where hiding and tactically planning the next move are the protagonists’ only options. Jane Levy, Dylan Minnette and Daniel Zovatto round out the core cast and perfectly sell their characters’ desperation and fear. The film is boosted to further heights with Alvarez and Rodo Sayagues’ stellar screenplay, which delivers satisfying character moments and a few jaw-dropping twists.

Don’t Breathe was a must watch in 2016; if its impending sequel is able to nail half of its predecessors strengths, Alvarez may reinvigorate the genre once more.

6. The Nice Guys (words by Thomas Lynch and Matthew Rodgers)

You’d be hard pressed to find a more fun time at the cinema than the one spent in the company of Ryan Gosling and Russell Crowe. Under the stewardship of Shane Kiss Kiss Bang Bang Black, they created a bona fide classic of instant rewatchability with The Nice Guys.

The chemistry between Gosling and Crowe is second to none, the writing is sharp and the jokes very rarely fall flat. Both of the leads are somewhat overshadowed by the daughter of Gosling’s character, Holly March, played by 16 year-old rising star Angourie Rice. She is the rebellious teen that exchanges in some forthright banter with her father that will have you in fits of laughter.

Disney Animation Studios has been on a roll of late, with many of their recent films rivalling the very best that Pixar has to offer. Zootropolis was therefore highly anticipated and it certainly lived up to all of our expectations. The story has twists, turns, and skillfully entertains both young and young at heart, but Zootropolis is more than just the tale of a rabbit trying to solve a case of missing animals in the eponymous city.

What really sets Zootropolis apart is how it tackles issues such as racism, discrimination and sexism head-on. It manages to tell a great story and explore themes of inequality and discrimination, all whilst being hilariously funny. There’s slapstick humour for the kids, but plenty of jokes, puns and references for adults. Disney put together a film that combines narrative, social commentary and humour to wonderful effect, and it’s an absolute must-see.

Deadpool contains plenty of lessons for studio executives everywhere. How much you spend doesn’t matter, it’s how you spend it. It cost $58 million, yet the film looked as good as the rest of this year’s blockbusters.

This film was huge, purely because it gave us something different in superhero cinema. They parodied comic-book tropes fantastically well. There was also a level of violence and dark humour that these types of films never have. Deadpool showed audiences that these films don’t always need morals and a PG rating. The new direction taken here blows apart claims of superhero fatigue among audiences.

The fact that the sequel to Blade Runner is in the hands of Denis Villeneuve is something we should all be thankful for after his stunning first-contact narrative, Arrival. His cerebral, meditative piece begins as an alien invasion movie, before evolving into something altogether more beautiful and personal.

It is a film about communication over physical confrontation. It is a film about family and hope. It is a conventional sci-fi movie in the daunting imagery of the alien pods hanging in the air and the erie score, but also unconventional at the same time. Instead of immediately rendering something we don’t understand as foreign and hostile, why not talk to them. Have a conversation instead of hurtling abuse their way, or in the case of most sci-fi movies, launch a few nukes.

Amy Adams has never been better as the emotional core of the story, and once again a Johann Johannsson score is an integral part of why all of the creative elements sync so perfectly together. Like the very best movies, Arrival stays with you for days after the credits have rolled.

The fact that this film achieves so much without a gruelling runtime is an achievement in itself. They packed the old Avengers, the new Avengers and their yet to be introduced heroes into one film. No character felt underserved, the story didn’t suffer. There were stakes, jokes plus scenes ripped from the comics. Overall, Civil War is one of the best Marvel films to date. Who would have thought 12 heroes on an airport runway could be so entertaining?

It’s not perfect, and once again the villain is the problem. They actually flesh out Zemo, but his evil plan is just too precise. The level of intricacy needed to pull off it off would require some kind of power, and he gets incredibly lucky as his plot unfolds. Yet, from a pure character and story perspective, this is the best of 2016’s superhero cinema. Overall, it lands just shy of top spot.

1. Rogue One: A Star Wars Story (words by Matthew Rodgers)

Gareth Edwards set out to make a war movie, and that’s exactly what he has done with Rogue One, bringing a completely unique vision to a series that hasn’t had a tonal shift like this since The Empire Strikes Back.

He lenses Rogue One in guerrilla fashion; a hand held intimacy and noticeably shallow depth of field that throws you into a Star Wars battle like never before. We’ve been wowed, but we’ve never been to the front line like this. The huge Scarif battle, which makes up the films impressive finale, and is a bit like a Club Med version of Hoth, might share as many moving parts as the Starkiller Base assault from The Force Awakens, but it’s more visually inventive and visceral as anything that has played out on the canvas created by George Lucas.

Felicity Jones is so much more than a tick box quota filler or Rey clone, Riz Ahmed plays Bodhi like an extension of his The Night Of character, all tics and nervousness, but he grows into the film as he’s given more to do. Diego Luna gives good stoic heroic as the potentially duplicitous Captain; whilst Yen and Jiang make an ultimately touching double-act when they’re not kicking ass or quipping. Ben Mendelsohn is almost as impressive as his cape.

When Disney were drawing up their own strategic plans for an all conquering extension of the Star Wars brand, it’s doubtful they imagined they’d launch it with something more impressive than an attack on Alderaan. Undoubtedly Rogue One has its flaws, but it remains an out of this world story told with real world relevance.