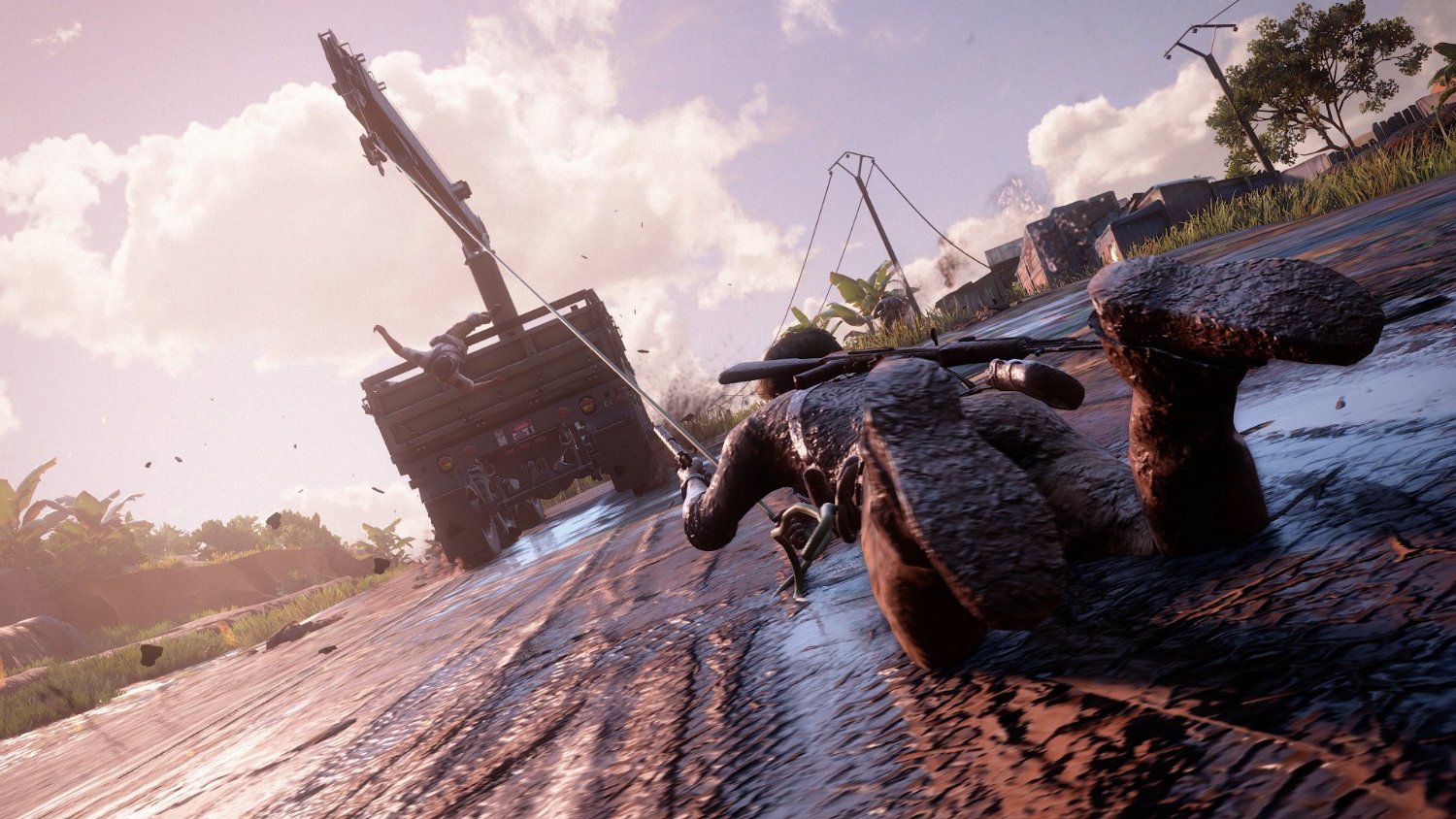 When was the last time a year delivered such a consistent onslaught of fantastic games as 2016? The year came to a close with the likes of The Last Guardian, we sped into the fall with Forza Horizon 3, spent the summer fighting alongside some memorable heroes in Overwatch, and we got a sequel to one of the best strategy games in recent times thanks to XCOM 2 in February. The crazy thing is that none of these awesome titles have even made our list of the 10 best games of the year!

What did, I hear you ask? Read on to find out.

Who saw this one coming? The Hitman series has always had its fans, but even its hardcore supporters were pretty bummed out by IO Interactive’s 2009 effort, Hitman: Absolution. When it was announced that its follow-up would be an episodic release rather than a full-blown retail affair, expectations plummeted even lower. How wrong we all were!

Hitman’s episodic structure proved to be a masterstroke, giving players a good few weeks to become intimately familiar with each map and keep them sated with the brilliant elusive targets to supplement the main story missions and other contracts. The elusive targets were limited-time hits that have appeared just about every week since launch, giving Agent 47s across the globe one shot at taking them down before they disappear for ever.

It’s the maps, though, that are the star of the show. They’re packed with dozens of incredible opportunities for murder, many of which are bolstered by the game’s fantastic sense of humour. Paris is the pick of the bunch, where one of the targets can be taken down by collapsing the rigging above a catwalk, spiking his drink at the bar, pushing him into the Reine, dropping a speaker system on his head, or in any one of plenty of other ways. If you can dream it up, you can probably pull it off, and even if you can’t you’ll have a lot of fun trying. Bring on season two!

I’m a sucked for good storytelling, and even more so for a game that continues a story, or pulls from a preceding story. Dishonored 2 is very much like a spiritual successor to BioShock Infinite, while also continuing its own storyline.

I was initially happy with being able to choose between either Corvo or Emily. I would have been pleased with just taking the role of Corvo again, but bringing Emily in as a more active character, and even more as a playable character, really intrigued me. The biggest advantage that appealed to me for this game versus others this year, though, is something I have always held as one of the most important aspects for a game: options.

One of the things that differentiates games from other art/media forms is for people to be able to inhabit and embody the characters within them. Being able to play them the way you want. Dishonored 2 handled that brilliantly and gave players all the options they could ever need.

One of the many things that makes Doom great is its self-aware tone. Early footage of what was then being pushed as Doom 4 showed the game headed in a more scripted and militaristic direction. The final product eventually said to hell with that and instead harkens back to what made the 1995 original so beloved: you were a bad-ass dude killing demons. Enough said.

Of course Doom also succeeds at being one of the best games of the year because it plays incredibly well. At 60 FPS and 1080p the gameplay looks stunning and plays incredibly fast, almost becoming very rhythmic. You’re constantly moving, bouncing between different enemies and picking up HP and ammo along the way by performing quick and snappy melee kills. All of that marries together to create one of the best shooters in recent memory.

7. The Witness (words by Alisa Hail)

The Witness, aside from being visually stunning, also manages to train and guide players through the ever increasing puzzle difficulty with a natural and elegant learning curve. There are no tutorials, only trial and error. Through this process, the player learns to navigate the picturesque world around them, leading deeper into the mysteries of the island. Audio files found sparsely throughout the player’s journey only add to the mystique, leaving the player to craft their own understanding of the game’s overall narrative.

The Witness manages to cleverly and easily combine the best elements of a puzzle game with easy exploration, a vivid landscape and enough mystery to entice players to continue their journey to the end.

This Ratchet & Clank is a fantastic example of how to bring back a classic series and please both fans and newcomers. Longtime fans will feel immediately at home with where the game sends them, yet at the same time will get a kick out of new areas and objectives.

It more than holds up in 2016 thanks to slick controls and eye-poppingly beautiful visuals, plus more of the crazy weapons that are a staple of the series and your arsenal comes packing heat from many of the previous titles. Insomniac have crafted a fun and humourous adventure with great set pieces, stunning visuals, fluid gameplay and charming characters. Even 14 years on, this series should still hold a special place in gamer’s hearts.

Titanfall was an amazing game in its own right. It took some old ideas (mech walkers and general first-person shooter mechanics) and made them both feel very fresh.  Unfortunately, while the core mechanics and overall gameplay of the first Titanfall were solid, the campaign mode (if you can even call it that) was a huge letdown.  As a result, the constant online battling got quite quickly.

That’s why I was so satisfied with Titanfall 2. Titanfall was such a technically perfect game that the only thing I was disappointed by was the severe lack of a good story mode.  Titanfall 2 gave me what I was hoping for in the first one.  It isn’t exactly going to win a Pulitzer Prize for writing, but I thought it married its already established world and gameplay with a satisfying story. The almost buddy-cop-style relationship between Cooper and BT was particularly engaging.

4. Inside (words by Tom Acres)

The old adage that looks can be deceiving has not rung as true as this in quite some time. At first glance, Playdead’s Inside looks like a very simple follow-up to their debut hit from 2010, Limbo. Both see you take on the role of a faceless child in a dark and dangerous world, running to the right; solving puzzles and avoiding danger as you go. It doesn’t take long, though, for Inside’s true nature to reveal itself.

Limbo is beloved with good reason, but Inside blows it out of the water. While the former was fairly one note in its gameplay and level design, leaning heavily on trial and error puzzles that could frustrate, Inside never lingers on one idea for too long. Playdead constantly introduce new puzzles, mechanics and concepts to keep you on edge, waiting for the next twist.

Just when you think you’ve got Inside sussed, it manages to surprise you once again – the final few chapters are unlike anything you’ve ever seen in a video game. The ending is horrific and awe-inspiring in equal measure, but it’s by no means the only sequence that stands out. Inside can be cruel, oppressive and downright disturbing; but it’s also gripping, creative and full of expression.

Every single scene is impeccably crafted, with a gorgeous visual style and equally effective sound design. Inside harbors some seriously unsettling imagery, and the presentation only serves to exacerbate it. Animation rivals the best the industry has to offer and the music – whilst used sparingly – is utterly haunting. As good as so many of this year’s titles have been, none are likely to leave quite the lasting impression that Inside does.

Firewatch was a game that carried decidedly less flash than ventures such as Fallout 4 or Rise of the Tomb Raider, but it serves as a fantastic example of how a small group of developers can create something more minimal, but just as impactful on the player.

The warm, picturesque scenery mixed with cold isolation only broken by the often quite clever dialogue between the protagonist, Henry, and the friendly but mysterious Delilah sets the proper mood for the game. The narrative, ultimately a story of Henry coming to grips with personal guilt, goes from mundane to bizarre, but ultimately guides the player on a similar journey of isolation and reflection.

The beauty of the scenery mixed with the bittersweet narrative, and the believable relationship/partnership between Henry and Delilah makes Firewatch not only poignant, but one of the most memorable games of 2016.

By now pretty much everyone is familiar with Batman and his tragic origin story. We’ve seen Bruce Wayne’s parents get killed countless times and well acquainted with Batman’s colourful rogues gallery. When it comes to Batman: The Telltale Series though, the game shines because it veers away from that established lore.

It completely goes in directions never seen before in any other medium and turns the Batman mythos on its head, resulting in scenarios that throw the very moral foundations of certain characters into question. It also makes playing as Bruce Wayne just as compelling as beating people to a pulp as Gotham’s Dark Knight. There are tough choices to be made, neat detective sequences and one of the most convenient interpretations of the Batmobile seen to date. Batman: The Telltale Series is certainly one of the developer’s best, if only they could just fix their botched engine.

Uncharted 4: A Thief’s End is a tremendous send-off and a stirling example of how to close a series, no matter what form of media. It’s not the landmark achievement that Among Thieves was, but it’s a terrific culmination of everything Naughty Dog has learned from 10 years of Uncharted and a jaunt into a zombie apocalypse.

Those who have enjoyed the series so far will of course be even more invested in where the story takes the characters. It’s testament to the writing throughout each of the games that Nathan, Elena and Victor ‘goddamn’ Sullivan are worth caring for as much as they are. The writing across the board is exceptional, resulting in what is by far the deepest, most meaningful and compelling narrative of the series. It still boasts plenty of blockbuster moments, including a brilliantly staged heist in Italy and a stunning jeep chase in Madagascar, but it’s actually the quieter character driven moments that will stay with you.

A Thief’s End is also the best playing Uncharted yet, with lots of open combat encounters allowing for a mix of heated gunfights and tactical stealth. Shooting feels good and is amplified by the traversal mechanics, which are further bolstered by the addition of a rope to swing across gaps and land on unsuspecting enemies. A Thief’s End also gives you plenty of opportunities to wander around, absorb the environments, enjoy optional conversations with your buddies and find collectibles. Indeed, it’s not just in the storytelling that The Last of Us’ influence is clear.

Naughty Dog has still made an action game, though, and nobody else makes cinematic action games quite like this. To take it for granted simply because we’ve seen Naughty Dog deliver it before would be churlish. It was good to have you back again, Drake, and we’ll miss you.