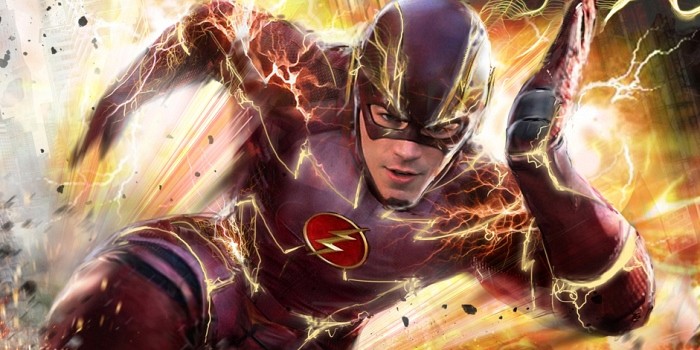 When Barry went back in time and saved his mother from The Reverse-Flash at the end of The Flash‘s Season 2 finale, there was only one word on fans’ lips – Flashpoint. The fan favourite comic book event from 2011 saw Barry do just that, causing a dystopian version of the timeline in the process. We were all pretty sure a Flashpoint adaptation was coming and now, thanks to The Flash himself, it has been officially confirmed.

At first, Grant Gustin looked set to simply tease fans about the opening episode of Season 3 on Twitter.

But then something magical happened. Showrunner Greg Berlanti tweeted Gustin back, giving his blessing for Gustin to reveal the title.

I'm cool with you telling them the title 🙂

And that title is…

Yes! Flashpoint is definitely coming, guys. So, according to the comics, that means we will see the likes of Wonder Woman, Aquaman, Cyborg and Batman finally making their debuts in the Arrowverse. Right? Well, maybe not. Grant Gustin also dished out one last tweet warning fans to expect the unexpected.

Fans shouldn’t be disheartened, however, as a number of things from the original story could well be retained. Reverse-Flash’s involvement is pretty much guaranteed, and we are bound to see the alternate heroic version of Wentworth Miller’s Captain Cold (called Citizen Cold). Likewise, Superman’s role in the plot (he is kidnapped by the government, instead of being adopted by the Kents) could be filled by Supergirl, instead. Speaking of which, the end of the Flashpoint comic saw a reboot of the whole DC continuity, The New 52 – something like this could allow Supergirl to mesh better with its new CW compatriots.

The Flash was recently confirmed to return on Tuesday 4th October, kickstarting the new seasons of The CW‘s four DC superhero shows. With Supergirl joining the network and Flashpoint promised, this looks set to be this biggest year yet for the Arrowverse.

Anyone else wish they had Barry’s speed so they could fast forward to October?