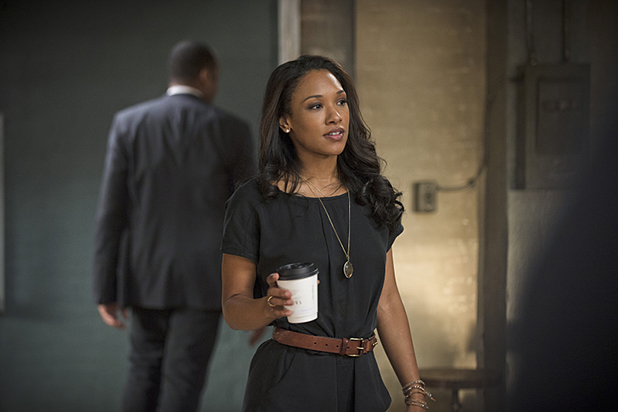 The Flash’s take on Flashpoint is set to change plenty about the timeline we know and love, as well as the characters. Cisco’s a billionaire, Wally West is Kid Flash, and Joe isn’t too fond of Barry. Based on the extended trailer, we know Caitlin is still a doctor of some kind. While we’ve seen plenty of Iris in the teasers, little is known about her Flashpoint identity. Is she still a journalist? Is she a cop like her Earth-2 doppelgänger? These details will likely be kept quiet until the Season 3 premiere. However, according EW’s Spoiler Room, “a big reveal” is on the horizon for Iris West.

Exciting news, but don’t expect her character to stray too far from the familiar. Iris actress, Candice Patton told EW the following:

“She’s a fixed point for Barry Allen, so no matter where we see her, no matter where we find her, she’s still very similar to the Iris that we’ve always known and loved, which is why Barry sees her as the shining star in the sky. He can always find her somewhat the same.”

In regards to what to expect from Iris as a journalist throughout Season 3, Patton teased she has “read some stuff where [they’re] moving in that direction.” We’ll see more of her actually at work, doing her job. In the past, the reporter side of her character has come out in bursts here and there. It’s good to know it will soon be further emphasized.

Back to the impending “big reveal.” Inquiring minds are probably curious as to just how big it is. Is it a Flashpoint wow-factor, where the results of the reveal are over once the timeline’s restored? Or is this something meant to ripple throughout the rest of the season? Grant Gustin previously teased that while the story arc is short, some ramifications are permanent. Perhaps this Iris shocker is one such aspect.

We’ll get our first hints of this and more once The Flash returns on Tuesday, October 4.