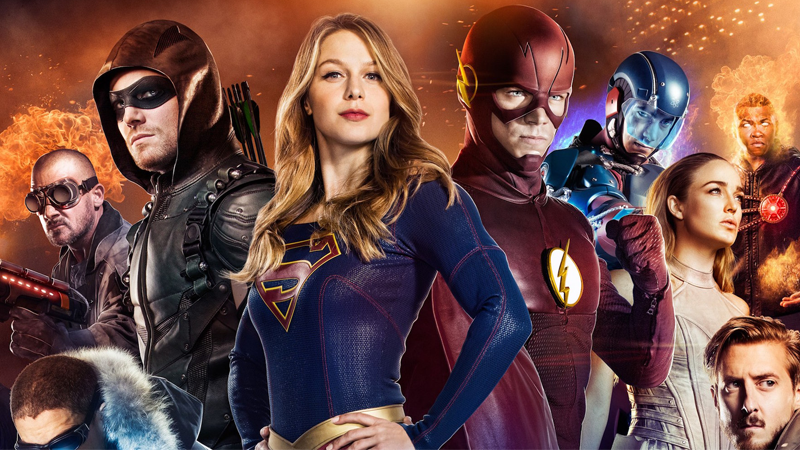 With The CW’s lineup of superhero shows now in full swing, anticipation is building around their four-night crossover at the end of November. Arrow actor Rick Gonzalez, who plays Wild Dog, has intensified that anticipation by posting a behind-the-scenes image on his Twitter account of The Flash and Supergirl alongside members of Team Arrow.

The image (via CBR) shows newfound members of Team Arrow Ragman, Mister Terrific and Wild Dog together with The Flash and Supergirl in costume, after filming part of the crossover. Check out the image below:

We’ve know for some time of The CW plans to unite the heroes and villains of their four shows: Arrow, The Flash, Supergirl and Legends of Tomorrow. It wasn’t until late September that we found out why that would be. The Dominators, a powerful alien race that debuted in the Invasion! comic-book arc, will descend upon earth to no doubt cause havoc, requiring the collective might of CW’s heroes to neutralise the threat – or just Supergirl.

Arrow and Legends of Tomorrow EP Marc Guggenheim recently told EW that this crossover is incredibly ambitious and is “very, very faithful to the comics.” So if you read the Invasion! arc during the 1980s, you’ll know what to expect in the crossover, which will take place over the show’s seventh and eighth episodes. It will all kick-off on The Flash, but how exactly it all begins remains to be seen. It is sure to be far more grandiose than previous crossovers, which just involved Arrow and The Flash, with Guggenheim describing it as “one of the most ambitious things anyone in network television has ever attempted.”

So expect spectacle, lots of comic-book action, and the following series to have substantially less of a budget. The crossover will begin to take shape in Supergirl on 28th November, run through The Flash on 29th November,  Arrow on 30th November and conclude with Legends of Tomorrow on 1st December.