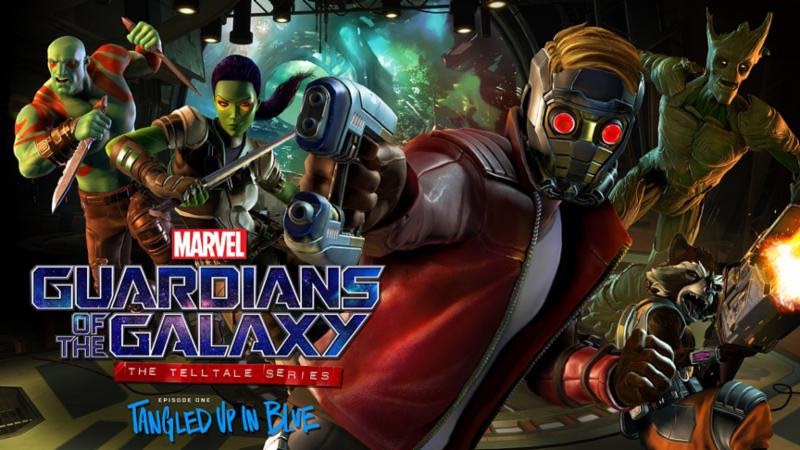 Telltale Games’ ambition to transform the world’s biggest properties into interactive adventures continues in just a few short weeks with the debut episode of Guardians of the Galaxy: The Telltale Series. The game’s trailer has just dropped to whet our appetites.

Due for release on Tuesday, April 18th, Episode One: Tangled Up in Blue is the start of a brand new story featuring the universe’s unlikeliest heroes: Star-Lord, Gamora, Drax, Rocket, and Groot. Much like the hit 2014 film that put them on the map, the game sees them competing with a ruthless enemy – presumably Thanos – to acquire a powerful relic.

The story will take players to Earth, the Milano, Knowhere and beyond, with a rocking soundtrack also promised. While clearly inspired by the film and its upcoming sequel, the characters’ boast a stylized look and a new cast has been tasked with bringing them to life. The Walking Dead’s Scott Porter is Star-Lord, Middle-earth: Shadow of Mordor’s Emily O’Brien is Gamora, Uncharted’s Nolan North stars as Rocket, Brandon Paul Eells from Watch Dogs is Drax, and Adam Harrington from The Wolf Among Us is Groot.

Guardians of the Galaxy marks the first time Telltale has teamed up with Marvel, having enjoyed a glimpse at how the other side lives last year when the team worked with DC on a Batman series, which was well received here at GeekFeed.

Each episode will set you back $4.99 or equivalent across PlayStation 4, Xbox One, PC and Mac, and iOS and Android. You can pick-up the entire season in a box for PS4 and Xbox One on May 2, but only the first episode will actually be on the disc – you’ll get a code to download the rest, which will be released throughout 2017. No news on a Nintendo Switch version, but Telltale has teased a future announcement on additional platforms.