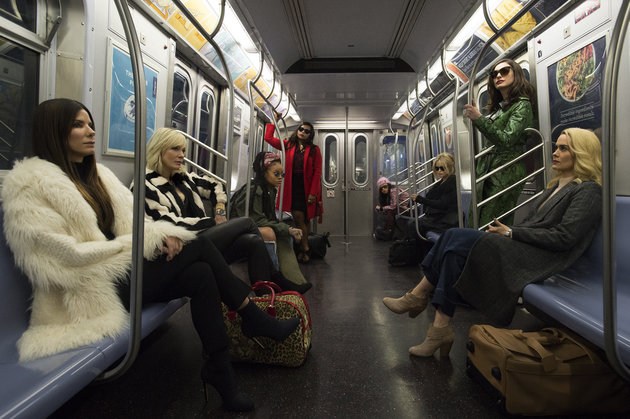 Reboots, reimagining, reimagining reboots, remakes, so on and so forth. Next off the conveyor belt is something slightly different, as Seabiscuit director Gary Ross jumps from directing a strong female driven franchise with The Hunger Games, to do the same thing, but to the power of eight. Ocean’s Eight, to be exact.

Subverting a franchise trend of men messing about in glamorous tuxedos and exotic locations, that has stretched as far back as the Rat Pack incarnation of Ocean’s Eleven in 1960, through to the Pitt/Clooney blockbusters of the mid-2000’s, Ocean’s Eight will give the ladies a chance to glam it up as they plot a heist at the annual Met Gala in New York.

Up until now we’ve only had leaked set photos, and there still isn’t a plot synopsis, but Warner Bros have released the first official still featuring the new look line-up, in which our eight career criminals are undertaking that most mundane of daily tasks; riding the subway.

Throw in a cameo from Steven Soderbergh’s trilogy, in the form of Matt Damon, as well as newcomers James Corden, Damian Lewis on bad-guy duties, and Richard Armitage, and you’ve got a cast with the potential to deliver some decent throwaway fun come summer 2018. Anything better than the self-indulgent naval gazing of Ocean’s Twelve and we’d consider it a resounding success.

Working from a blueprint written by Ross, Ocean’s Eight will unleash its crime caper shenanigans on 8 June 2018