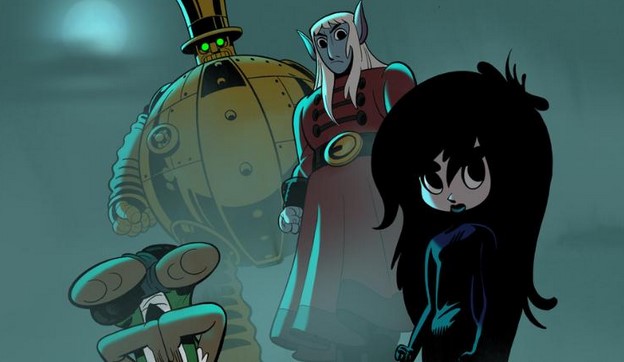 Besides Primal for Adult Swim, animator Genndy Tartakovsky has teamed up with Cartoon Network Studios for a new show called Unicorn: Warriors Eternal. Just in, we have a first look at the characters for UWE, and we also have a story description.

Variety also reports that the show will be drawing inspiration from myths and lore from all around the world, and the series will focus on ancient heroes who have been reborn in the bodies of teenagers. Here’s the description:

Throughout history, unicorns have symbolized the virtuous, appearing to ensure that goodness reigns. When the reawakening of our heroes comes too early, they find themselves in the bodies of teenagers. Damaged as a result, their memories of who they are and the history of the unicorn over the centuries have been lost, with some of their magical abilities weakened and fragmented. Not only do they have to protect the world against the prevailing darkness, they have to do it while navigating the unexpected laughs and humor that come with teen angst and emotions.

Though Primal looks to be strictly for adults, it looks like Unicorn is going to be something for a younger audience—much like Tartakovsky’s other work like Samurai Jack and Dexter’s Laboratory. While we can suspect that the show will have some light humor to balance the world-saving element, we should also expect some topnotch action scenes from Tartakovsky as well.

We don’t have a release date for Unicorn: Warriors Eternal yet, but seeing that it’s been announced now, it’s possible HBO Max is gearing for a release sometime next year.