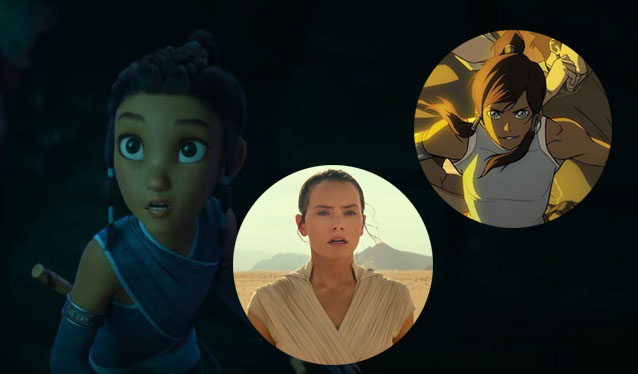 Disney had just dropped a new trailer for their upcoming animated movie Raya and the Last Dragon, and while the trailer is visually stunning as usual, some fans have noticed that it looks a lot like some other well established franchises.

Apparently the hashtag for #RayaandtheLastDragon has been filled with comparisons to Nickelodeon’s Avatar: The Last Airbender as well as the latest Disney’s Star Wars movies.

They are the same. Change my mind. pic.twitter.com/i3d46Lb4lC

While young Raya could pass for either Korra or Katara, the man in the mask that she goes up against feels a lot like the Blue Spirit character from ATLA. What’s more, the hybrid animals—like Tuk Tuk—are something straight out of Avatar as well; a world with turtleducks and saber-tooth moose lions.

Hold up! Raya from #RayaandtheLastDragon out here looking like Rey from Star Wars: The Last Jedi…AND she's voiced by Rose Tiko herself Kelly Marie Tran. pic.twitter.com/8rcXOXwfmB

I think the new Star Wars looks good. Interesting choice having Kelly Marie Tran play Rey and I really like the South East Asian inspiration and BB-8's had an interesting makeover but– Wait… Oh it's Raya… I see.

When it comes to Star Wars comparisons, young Raya feels a lot like Rey, even going so far as to fight with sticks. The shot of the character riding Tuk Tuk is also reminiscent of BB-8. I guess Kelly Marie Tran can’t full shake off Star Wars after all.

While Disney may be moving a lot of their films like Soul straight to the streaming service, it looks like they’re confident that theaters will be running again by the time March comes around. While it does seem a tad early now, hopefully some theaters can function at minimal capacity by the time March 2021 rolls in.

In a land called Kumandra, split into five different regions, a warrior named Raya searches for the last dragon in the world.