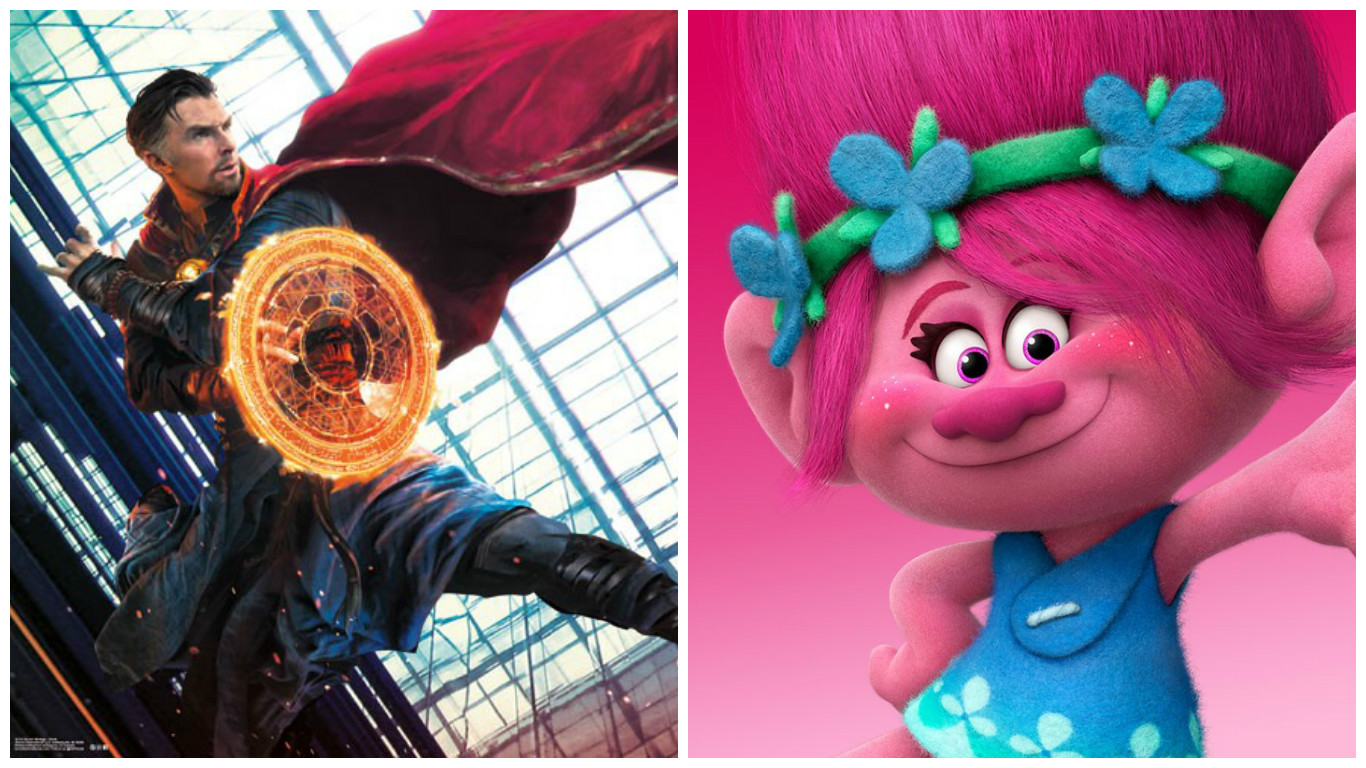 In a busy weekend at the multiplex, three new films took the top three spots. To no surprise, Marvel’s new Cinematic Universe chapter Doctor Strange easily put a spell over the number one spot. The new animated family film Trolls also had a strong second place opening, while Mel Gibson’s well-reviewed Hacksaw Ridge had a decent weekend gross as well.

Doctor Strange swooped in as the new major Marvel film of the season and it didn’t disappoint. Opening to solid reviews (check out our very own Tom Acres’ review here) and an ‘A’ Cinemascore from paying audiences. The film pulled in $84.9 million this weekend including $9.4m from Thursday night preview shows.

That figure lines up well with the $85m debut of Thor: The Dark World, just below the $94m debut of Guardians of the Galaxy from 2014. It’s also well above the $57m debut of Ant-Man last summer. While Strange didn’t quite match the $98m opening of Iron Man from 2008, it did manage to top the $65m openings from fellow origin story films of Captain America: The First Avenger and Thor, as well as The Incredible Hulk ($55m).

No matter which way you slice this one, it’s a rousing success. The Benedict Cumberbatch-starring film should be well on its way to over $200m+ before his reign is over. The addition of the international cumulative sits at a very sturdy $325m worldwide all against a production budget of $165m.

In second place, Trolls served as a popular counter-programming option for families. The film opened to $45.6 million, or right in the wheelhouse of a traditional Dreamworks Animation release. Similar openings in the mid-$40m range for Dreamworks include Megamind, Kung Fu Panda 2, The Croods, and Madagascar. Paying audiences enjoyed the film, also giving it an ‘A’ Cinemascore. Look for this one to hold steady as we approach the Thanksgiving holiday.  The worldwide total stands at a healthy $149.6 against a budget of $125m.

Mel Gibson returned to the director’s chair after a ten-year hiatus with Hacksaw Ridge. The WWII drama about an army medic (Andrew Garfield) that refuses to use a gun on the battlefield racked up a decent $14.7 million debut, about on par with the $15m debut of Gibson’s Apocalypto from 2006.

While I’m sure Lionsgate was hoping for an opening closer to $20m, the film received an ‘A’ Cinemascore from audiences, earned glowing reviews, and also has a lot of Oscar buzz surrounding it which could carry it well over the holidays if it can manage small declines in the coming weeks. Overall, this is a better debut than The Birth of a Nation from a four weeks ago which has already disappeared from the box office charts despite great reviews and Oscar buzz.

Holdovers took in the leftovers this weekend. Boo! A Madea Halloween dropped a reasonable 54% to $7.8m from last weekend despite the holiday being over. Last weekend’s disastrous opening weekend for Inferno wasn’t a fluke.  The Tom Hanks-Ron Howard sequel in the Robert Langdon series dropped nearly 58% to $6.2m for a paltry $26m cumulative after two weeks.  This one will rank as one of the biggest bombs of Hanks’ career, at least in the states.  Luckily the film is a major international player having grossed $159m overseas so far for a $185m worldwide total.

A trio of film wide releases open next weekend – Arrival starring Amy Adams and Jeremy Renner, Almost Christmas starring Gabrielle Union and Danny Glover, plus the Europcorp thriller Shut In starring Naomi Watts. Ang Lee’s 3D war drama Billy Lynn’s Long Halftime Walk also gets a limited rollout before going wide the following weekend.  None of these films will like be able to take Doctor Strange and Trolls from the top two spots. 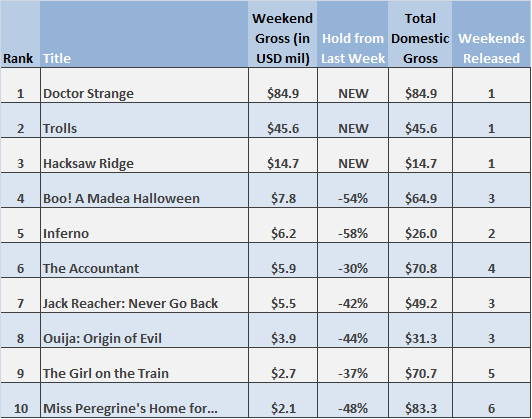