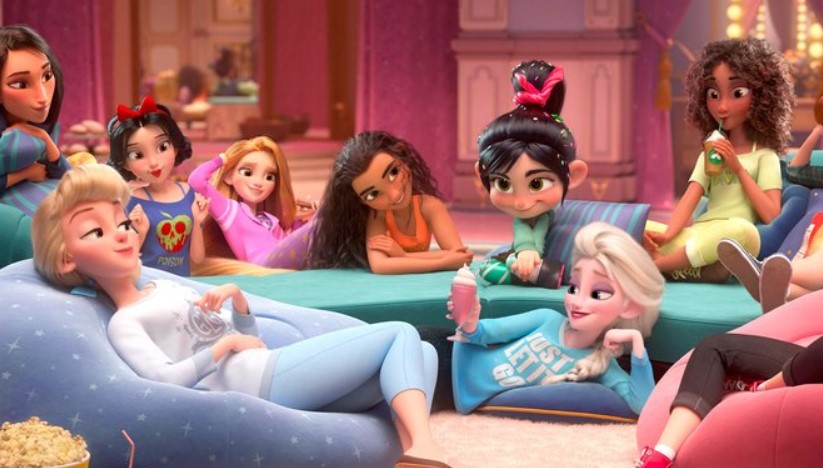 The trailers for Wreck-It Ralph 2 have been so chockfull of cameos that the film already has hundreds of memes coming from it. One of the favorite cameos is the room full of Disney princesses, and now Entertainment Weekly has released this new picture having all of the DPs lounging around in their PJs.

Apparently, it was Vanellope (Sarah Silverman) who had something to do with the Princesses getting out of their usual get-ups. Silverman told EW:

“I’m very proud of my character being a Disney princess with a human waist. I love that she is a princess but wears, like, a hoodie, and she inspires them all to wear comfortable clothes… It didn’t really cross my mind that I’m a Disney princess — like, that I’m canon— until we all met this year, and I got a little choked up. It’s corny, I know, but I was like, ‘Oh s—t, right. I’m this Jewish, comfortable-clothes-wearing Disney princess. How cool is that?”

It’s worth noting that the original voice actresses for each princess (save for the deceased ones) have all been brought back to reprise their roles in the film. We’ve already heard the likes of Elsa and the others talk, but we have yet to hear Mulan, Moana, or Tiana speak. Either way though, I think it’s safe to say that each princess will have their own time to shine.

Even Merida from Pixar has a hilarious scene in the new sneak peek: