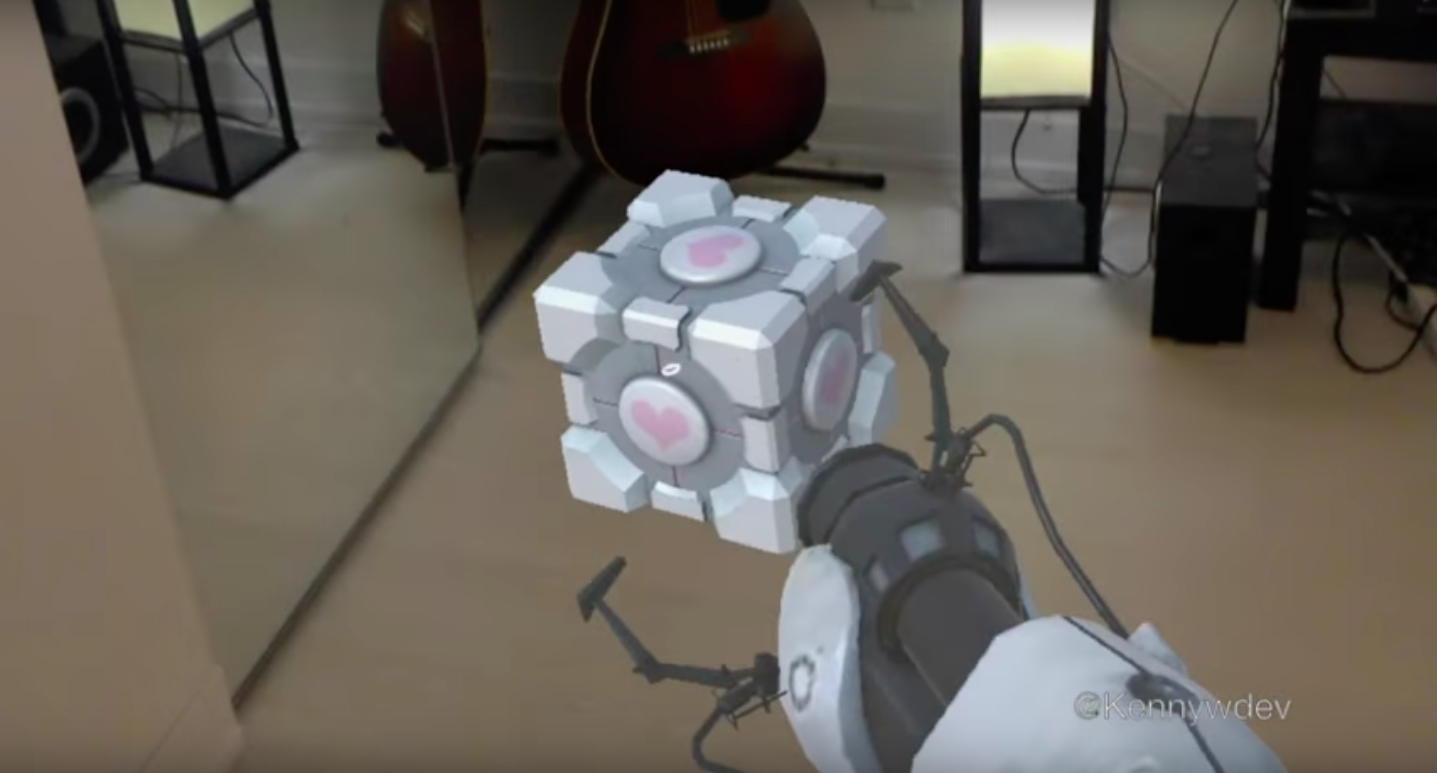 Have you ever wanted to be a human test subject trying to solve her way out of an evil science center run by a murderous and musical computer/robot? If you’re a fan of Valve’s Portal, then you’ve at least kind of thought about it. At least, it is pretty fun in virtual reality, where it is also much safer. However, one clever developer decided testing portal technology might be just as much fun in the comfort of his own home, or office building, or alley, or… you get the picture.

Augmented reality developer Kenny W, already a Pokemon fan’s hero for developing the PokeLens, used the Microsoft HoloLens to develop a version of the Portal game that can be played in augmented reality. In his gameplay video, you can watch Kenny tossing a Companion Cube through various portals, enacting the same feats of physics and dimensional dynamics (not so certain about the scientific accuracy of that last phrase) that Portal is known for. In the game, this dynamic is used to solve puzzles, and Kenny uses it to great effect in the video to knock down a turret at the end of a long hallway, or quickly teleport the cube from one staircase to another. It is impressive how the AR Companion Cube interacts intelligently with the surrounding real-life objects and definitely proves AR technology has some amazing prospects for the gaming industry. But then, we already knew that.

Kenny told The Next Web the game was designed using the Unity 3D Engine which is supported by the HoloLens.

However, there are several downsides to this story. For one, the game isn’t something available to everyone, but rather a work of love developed by Kenny, and a source of eternal jealousy for all us Portal fans. Secondly, even if you could play it, you’d have to buy the HoloLense which for now costs over $3,000 as it is largely still meant for commercial use. Nevertheless, the technology has only been available to the public for about a year (it began shipping in March 2016) so, one can hope as the technology continues to develop, it will become cheaper. This is most likely the case and if Valve is already creating Portal experiences for VR, then why not for AR once the technology becomes more widely available.

More importantly, developers like Kenny W showing interest in this technology (even before it becomes more available to us mere mortals with smaller bank accounts) is a very good sign that the gaming industry will soon see a revolution that will be bigger even than VR. At least, we won’t interact with our worlds in the same way, and we hope to some extent that means facing off against GLaDOS wherever and whenever we want.