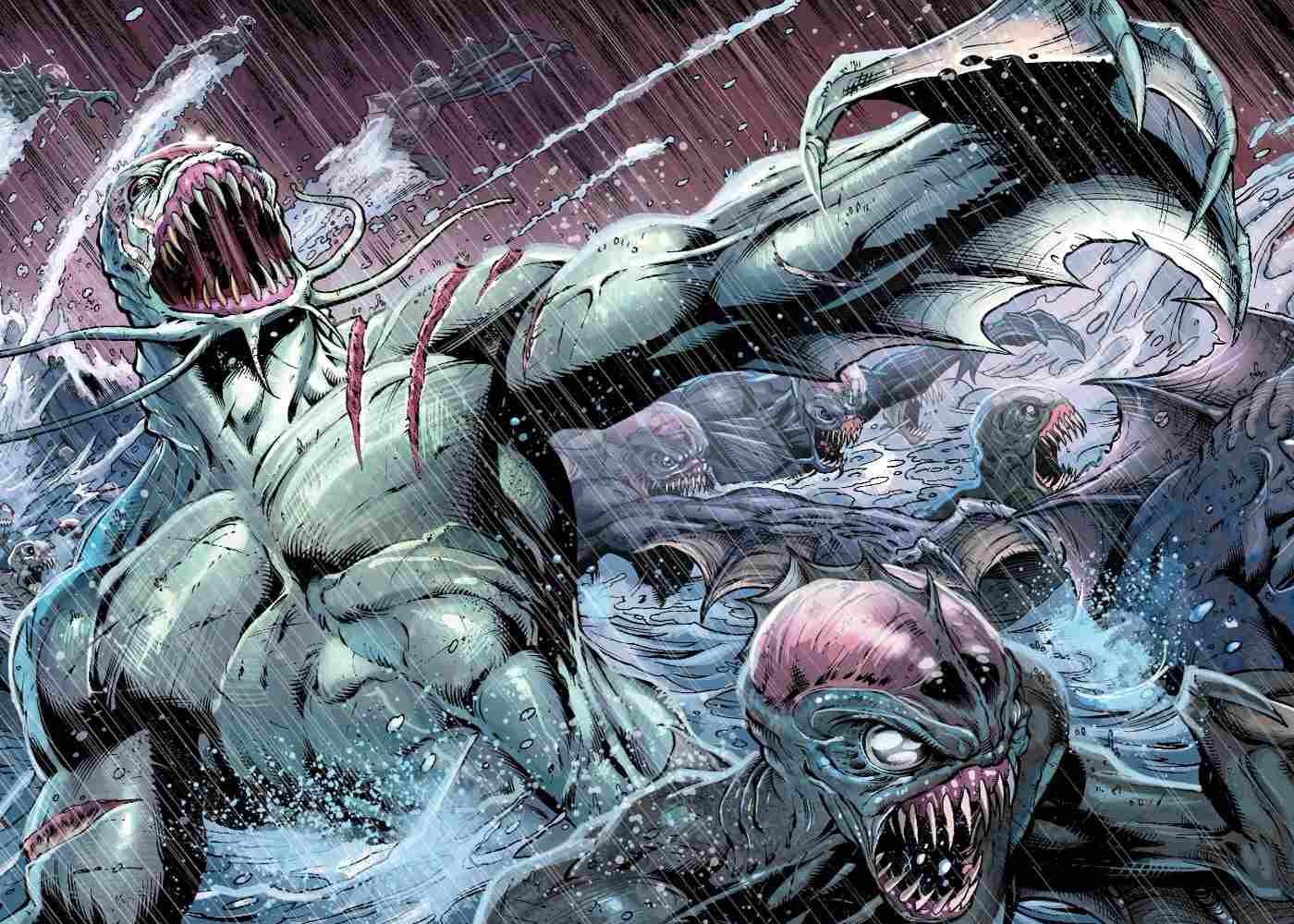 Production on Aquaman just got into full swing several days ago. As such, James Wan and Co. have very little to reveal. However, a new report from Superhero News suggests Wan is looking to bring the creepiest creatures of Atlantis to life in a practical fashion.

In the most recent episode of the Superhero News podcast, the panel unveiled an exclusive scoop. Apparently, bipedal, humanoid creatures with fins are some of the characters fans should expect Aquaman to encounter. According to sources close to the production, these humanoids have big heads, big eyes, and “very long, very sharp teeth.” The panel posits the beasts are possibly The Trench.

The race of carnivorous monsters debuted during The New 52 with Geoff Johns’ run of Aquaman. Nearly extinct, The Trench were taking captives to feed their Queen and their young to ensure the survival of the species. Of course, Aquaman was left to make the tough choice: extinction is never an easy call. It wouldn’t be too surprising if the DCEU chose to take a similar route.

Most interesting about the creatures in Aquaman are the way in which they’ll be portrayed. James Wan may approach their design a bit more practically, using minimal CGI to bring the beasts to life. To make The Trench taller, if the creatures described are indeed that race, stilts will be used. That’s right, a person will wear a practical monster suit and stand on stilts to bring Atlantis’ creepiest to life. Taking it a step further, Superhero News reports the creatures’ faces will be animatronic. This doesn’t mean computer generation is totally off the board, just that it won’t take as much precedence as expected.

During the podcast, the panel goes on to add “there are six characters that were described as having their own individual personalities.” The Superhero News source didn’t offer a name. But the description of the six says they are  somewhat similar to the look of Abe Sapien in Hellboy. However, their bottom halves are “more of a mermaid-style, fish tail.” Apparently, their suits, too, will be practical. Again, the podcast’s panel offers their position on who or what the descriptions are referring to. Might the Deep Six make their cinematic debut? The group is a faction of New Gods, serving under Darkseid. When the ruler of Apokolips commands, the deep sea monsters gives Darkseid’s enemies hell on his behalf.

If any of the above is true, in regards to the Deep Six, it could be a cool way of tying Aquaman to the rest of the happenings in the DCEU. For now, though, this is all simply speculation based on unfounded reports. Hopefully, we’ll learn more soon.

Check out the Superhero News podcast in its entirety below. The Aquaman talk begins at the 20 second mark.